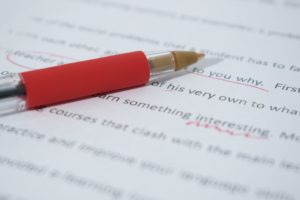 We all know that punctuation — marks in writing, such as ” “, : , and ! — is important. Sometimes just a small change in punctuation can change the entire meaning of a sentence.

For example, consider (look at and think about) the following sentences that use the same words in the same order, but have different punctuation.

Woman, without her man, is nothing.

Woman! Without her, man is nothing.

Same words in the same order, but the two sentences have entirely (completely) different meanings!

Here’s another example of how punctuation can change the meaning of a phrase.

The man dropped the bullet in his mouth.

The man dropped, the bullet in his mouth.

A bullet is the small piece of round metal that is shot out of a gun. The first phrase means that the man himself put the bullet into his mouth, and we can assume (believe to be true) that the man is still alive.

The second phrase means that the man dropped or fell to the floor, meaning that he is lying on the floor with a bullet in his mouth. From this, we can assume that the man died when a bullet was shot out of a gun into his mouth.

As in our first example, these two phrases use the same words in the same order, but one comma changes the meaning entirely.

*A game changer is an idea or event that makes a big difference in a situation. For example, the laptop computer (portable computer) was a game changer in personal computing.

**This post was adapted from “What Insiders Know” from Cultural English 91. To see the rest of the Learning Guide, including a Glossary, Sample Sentences, Comprehension Questions, a Complete Transcript of the entire lesson and more, become a Select English Member.