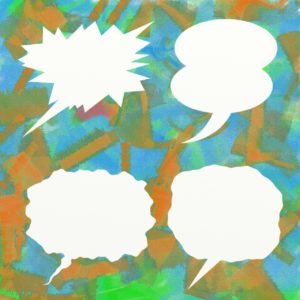 The Yiddish language originated in Central Europe in the 9th century A.D., spoken largely by the Jewish communities there. It spread to other parts of Europe (especially Germany), and was widely spoken in several countries prior to World War II.

Beginning in the 19th century, Yiddish-speaking immigrants started to arrive to the United States, especially to large cities such as New York City. As has been the case with other non-English-speaking waves (sudden large number) of immigration to the U.S., Yiddish has had a noticeable effect on American English.

Many Yiddish words have made their way into the daily conversations of American English speakers. (Some of them are real Yiddish words, but others have been made up (created)). Many of these words begin with the letters “sch(m)” or “sh(m).”

For example, to schlep means to drag (pull an object while it is still partly resting on the ground) a very heavy object, or to carry something on a long, difficult journey: “Maria lives on the fifth floor so every day she has to schlep upstairs with all of her books when she gets home from school.”

Schmuck is a rude word used to refer to a person who is very stupid, foolish, or easily tricked: “Can you believe that schmuck bought that old car for $10,000?” Or, “Some schmuck left the door open and the dog ran away.”

The verb to schmooze means to chat (speak informally) in an intimate or close way with someone who has more power and influence than you do, with the goal of making a good impression on that person and/or to influence them in some way: “Look at David. He’s trying to schmooze with the bosses so he has a better chance of getting a manager job.”

A schnoz or schnozzle is used to talk about a nose, especially a very large nose: “I hope my baby doesn’t grow up to have a schnoz like mine!”

Finally, a shtick is comedy performance or funny routine to make other people laugh that is associated with a particular person: “That comic always uses the same shtick, slipping on a banana peel (outer cover of fruit) to try to make his audience laugh.”

There are many loan words (words adopted from another language) in English and these are just a few of the most common Yiddish ones. Now that you know them, you won’t feel like a schmuck the next time you hear them in conversation.

P.S. If you’re curious how these words are pronounced, click on the links below to hear pronunciations:

* This post was adapted from the “Culture Note” from Daily English 701. To see the rest of the Learning Guide, including a Glossary, Sample Sentences, Comprehension Questions, a Complete Transcript of the entire lesson and more, become a Select English Member.