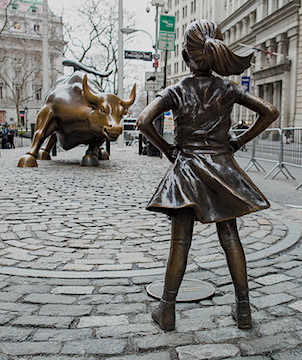 On that day, called Black Monday, the value (amount of money something is worth) of stock markets around the world dropped very quickly. A stock market is a place for people to buy and sell shares of stock – small parts of a company. The idea is to buy the shares, hold them for a while, then sell them for more than you paid when you need some money. Black Monday began in Hong Kong, then spread to Europe and the U.S.

The U.S. stock market, often called Wall Street for a street in New York’s financial district (area), lost about 25% of its value that day. Many people panicked (became extremely frightened), but by the end of the year, the stock market’s value was greater than it had been at the beginning of the year.

Arturo Di Modica, an artist from Sicily, responded to Black Monday in an unusual way: he made a sculpture (statue) of a bull (a male cow) and placed it in the middle of New York’s financial district.

Charging Bull became an “instant hit (immediately popular)”, according to the New York Times, and one city official said that “people are crazy about the bull.” After almost 30 years, many visitors to New York still include it on their must-see lists. Some say it’s almost as popular as the Statue of Liberty.

The story might have ended here except for one thing: a second sculpture, of a small girl, appeared a few weeks ago on the morning of International Women’s Day. This sculpture, called Fearless Girl, stands in front of Charging Bull and appears to be trying to stare it down (look at someone so long that they feel uncomfortable and turn away). A Wall Street company paid to have her made and is using her to promote one of their products and show support for women in leadership.

Di Modica is insulted and upset. He thinks that Fearless Girl is attacking the bull, and that she changes Charging Bull’s message of hope and prosperity (to have enough) into something negative. He wants the city to move her.

The artist who made Fearless Girl disagrees. She said she made sure to keep her soft. She’s brave, proud, and strong, yes, but she doesn’t want to argue or fight.

For now, Fearless Girl will stay. The city of New York has given her a permit (official permission) to be there for 11 months. We’ll have to wait and see what happens after that.

Photo by Anthony Quintano is used under Creative Commons license.