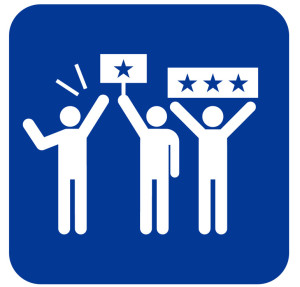 This year’s election of the next president of the United States has been one of the strangest – perhaps “craziest” is a better word – in the past 100 years.

Today is called Super Tuesday, a day when several state elections take place that will help determine who will eventually be our next president. (If you want to understand more about how we elect our president, I strongly suggest you read my explanation from the 2008 election here and listen to English Cafe #118.)

Instead of trying to explain this year’s race (competition; election) in detail, I’ll attempt to define a few key phrases or terms you might read in articles about the election in American newspapers and websites.

Exit Polls – These are opinion polls (questions; surveys) that are given to people on the day of an election. Many newspapers and TV channels try to find out who people voted for (and why) after they have actually voted (and therefore when they are “exiting” or leaving the place of voting). This allows them to declare (announce; tell people) the winner before the official (actual) votes have all been counted, and to understand the reasons people voted the way they did.

Firewall – Normally, a firewall is wall or section of a building that is built to prevent fire from moving from one part of the building to another. In this election cycle (period of elections), it has been used to describe a state or set of states in which a candidate thinks he or she has very strong support and therefore will not lose.

For example, Hillary Clinton has received a lot of support from African American (black) voters, so states in which there are many such voters (such as South Carolina and others in the Deep South) are part of her “firewall” that will protect her from “’burning” (Bern-ing?) down – that is, losing the election.

The Establishment – These are the (usually paid) leaders and organizers of the Republican and Democratic parties, along with other political “professionals” who run and control the party organizations. Most work and live in Washington, D.C.

Many people believe that the success of some of the candidates this year, especially Donald Trump and Bernie Sanders, is because people want someone “outside” of the Establishment. They want someone who will “blow up” or destroy the normal way of doing politics in the U.S. and try something different.

The Base – These are the most loyal voters for each political party, the ones who will usually give the most time or money to the party to ensure (make sure) it will win. In the Democratic Party, these are those who are mostly on the political Left; in the Republican Party, those most on the political Right. In order to win the nomination (the right to represent the party in the main or “general” election in November), a candidate has to win the base of his or her party first, since they are the ones who normally vote in the elections that decide who represents the party (that is, the elections going on right now, called the primaries).