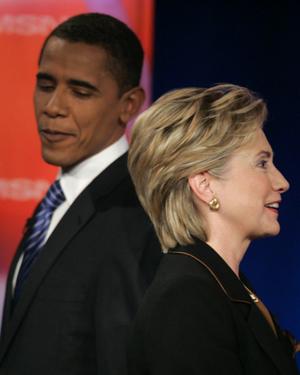 Today is being called Super Tuesday in the United States. This is not related to the Super Bowl, which was last Sunday. It’s called Super Tuesday because it is the most important day for electing the candidates of the two major political parties (political groups), the people who will represent each party in the next election. The American election system is somewhat complicated, but here is a brief explanation.

We have two large political parties: the Democrats and the Republicans. Each party picks (chooses, selects) its own candidates for president. The process for picking the candidates takes approximately seven to eight months, beginning in January and ending in July or August. There are two steps. In Step One, each person who wants to be the candidate for his or her party tries to win delegates (representatives) from each of the 50 states. These delegates are picked by each state, and each state determines how it will pick its own delegates. Each state also determines when it will pick its own delegates. For example, people in Iowa decided to have their election for delegates in January. Other states picked different dates in February, March, April, and May (and sometimes as late as June). This means that each person who wants to be the candidate will travel to these different states and try to win delegates. This also means that if you lose in some of the early states that pick first, you may not be considered a good enough candidate to continue, so it is important to win early and keep winning in the other state elections.

This is one reason why people think this is a crazy system. Both parties usually begin with seven or eight people who want to be the presidential candidate for their party. But if they don’t win some of the early states, they will probably have to drop out (quit) because people will think they are not popular enough to win. So there are really three or four states that effectively (in fact) select the candidates – the states that vote early.

There is no logic as to (related to) which states go first. Historically, New Hampshire was always the first state to pick its delegates, but now it is Iowa. Since each state wants to have an influence on who is the winning candidate, states have an incentive (motivation) to make their elections earlier and earlier. If you are a state that waits until May or June to have your election for delegates, the race (the contest, competition) could be finished already, since the winning candidate only needs a majority (51%) to win the nomination as the candidate for his or her party.

In the past several years, states have moved their elections from the later months to the earlier months in order to have a greater say (influence, voice) in determining who becomes the candidate. Today, there are 24 states that are holding elections to pick delegates, all on the same day! This is the most number for any day of the process, so it is called ‘Super’ Tuesday (elections in the U.S. are usually held (take place) on Tuesdays, not Sundays as in many other countries).

After all the states pick their delegates, we then go to Step Two, the national convention. All the delegates get together in one place and vote for the person they want to be the candidate for their party. This person is called the nominee (the selected or chosen one). These delegates must vote for the person their state told them to vote for, at least on the first ballot (vote) of the convention. If no candidate has a majority on the first ballot, then there will be more ballots until the winner is chosen. After the first vote at the convention, delegates are free to vote for whomever they like. However, this has not happened in many years. Usually, the winning candidate has enough delegates to win on the first ballot. These national conventions – one for the Democrats, one for the Republicans – are held in different cities every four years.

We’re not done yet! I said that each state has its own election on the day that it wants to to pick these delegates to the national convention (which is held in July or August). But there are two kinds of elections that a state can use. The first is called a caucus. A caucus is when people from each neighborhood or area come together at a school or other large building and meet to talk about the election and select delegates to their state political convention. Many states still have caucuses, including Iowa, Minnesota, and a few others. I used to go to caucuses when I lived in Minnesota. You see your neighbors there, talk about politics, and then select your delegates for your favorite candidates.

Most states have the other method of picking delegates, called a primary. A primary (meaning “first”) is like a normal election, where people go to a place (called a polling place) and vote for the person they want. There are no meetings, and the ballot is a secret. Big states such as California and New York use a primary system, and both of these states will be selecting their delegates today, on Super Tuesday.

After each party selects its candidates, then there is a general election in November (the first Tuesday in November), held every four years to elect the president. In the general election, the two nominees try to win as many votes as possible, and all 50 states vote at the same time. The winner becomes president. (Actually, it isn’t quite that simple, but I’ll wait until November to explain it all!)

In today’s election, there are just two Democrats who are still left in the race (contest) for the nomination of their party: Senator Hillary Clinton and Senator Barak Obama. All of the other people lost the early primaries and caucuses and dropped out already (after only four weeks!). For the Republicans, there are three people: Governor Mitt Romney, Senator John McCain, and Governor Mike Huckabee. The polls (opinion surveys) say that McCain will probably win the Republican nomination, but no one knows who will win the Democratic nomination because the race is too close to call (too even to know who will win). It is likely that neither Clinton or Obama will win enough delegates today to get the required 51%, so the election for the Democrats will not be decided (determined) today. One thing is certain, however: the Democrats will nominate (name, select) either the first African American (Black) candidate (Obama), or the first woman candidate (Clinton) in the history of the United States.