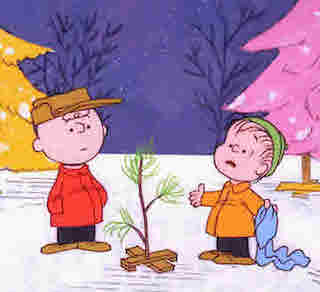 Few people expected the Charlie Brown Christmas television special to amount to much (be very successful). When the producers (people responsible for it) watched it for the first time, they worried. Two CBS television executives watched it in what one writer calls “stony (quiet, not moving, like a stone) silence.” At the end, one of them said to the producers, “Well, you gave it a good try.”

That was 1965. This year we celebrate 50 years of success for A Charlie Brown Christmas.

The Peanuts comic strip had become so popular by the middle of the 1960s that Coca-Cola hired Lee Mendelson to produce (create, make) an animated (action cartoon) special to be shown on the CBS television network at Christmas. Charles Schulz, Peanuts’ creator, agreed to write the story.

Schulz wanted to tell a simple story that included childhood memories of snow, ice-skating, and school Christmas plays (performances of music and stories). He also wanted to say something about the true meaning of Christmas and insisted on including the Christmas story from the Bible saying, “If we don’t [tell the story], who will?”

The story includes Charlie Brown and his friends from the Peanuts comic strip. In it, it’s Christmas time, and Charlie Brown is unhappy. Lucy suggests that he produce a Christmas play. He tries, but no one cooperates with him. And the only tree he can find to decorate the stage (where actors perform) is small and ugly. The other children, especially the girls, laugh at him.

Near the end of the story, Charlie’s friends change their minds, and help him decorate his little tree.

Several things made A Charlie Brown Christmas unusual in 1965. First, the producers used child actors for the voices. Second, the music was written and performed by a jazz pianist, Vince Guaraldi. Finally, they didn’t use a laugh track – prerecorded laughter that could be added to the program wherever the producers felt it was needed. It felt and sounded very different from other programs of that time.

Those who worried about A Charlie Brown Christmas shouldn’t have. The first year, 45% of the people watching television that night watched A Charlie Brown Christmas. It has become an American Christmas tradition, along with movies like It’s a Wonderful Life and A Christmas Carol. It received an Emmy (award for outstanding TV programs) in 1966, and the music was voted into the Grammy (music award) Hall of Fame in 2007.

Two people were right about the future of A Charlie Brown Christmas at the beginning. When the producers told Schulz about their worries, he told them not to worry, “It’s going to be fine.” And one of the artists who worked on the special told the producers they were crazy to worry about the special. “This is going to run for 100 years!” He may be right.

You can find the music and parts of the special on YouTube and at the iTunes store.