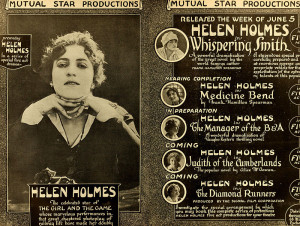 Have you heard of the movie stars Helen Holmes and Helen Gibson? Me, neither, until I read about them recently.

Helen Holmes was a silent film (movie with no dialogue or speaking by the actors) star who appeared in many films at the beginning of the 20th century. Beginning at the young age of 20, she starred (was the main actor) in 26 action films as part of a series called The Hazards of Helen.

The first film appeared in 1914. They were action films where the title character — Helen — had to get herself out of a series of difficult situations. Sometimes Helen had help and sometimes she was saved by a someone else, but in most of the films, she uses her own ingenuity (cleverness) to get out of scrapes (difficult situations) and to capture (to catch) the bad guys and to bring them to justice (have them arrested by the police).

Some people call Helen Holmes the first female action hero (movie star in action films). She did many of her own stunts (difficult and dangerous physical actions). These included crawling (moving on your hands and knees) on the hood (front section that opens) of a moving car, fighting on top of a moving train, and driving a motorcycle off a bridge and into a river.

Helen Holmes was born in 1892 to a Norwegian immigrant father and a mother from Indiana. She was a pretty woman and started working as a photographer’s model, but soon started acting, mostly in the theater and in bit parts (small roles) in films. As a result of these popular films, Helen Holmes became a big star, although her later films never had the same level of popularity as her early ones.

Interestingly, although she did many of her own stunts, Helen Holme had a stuntwoman (woman whose job is to do the dangerous actions in movies in place of actors) who did the remaining stunts. She was another woman named Helen–Helen Gibson. (She also acted in non-starring (not as one of the main actors) roles in early The Hazard of Helen films.) Later, when Helen Holmes and her director husband went to work at another movie studio (company), the second Helen was given the starring role in the later The Hazards of Helen films. Here are some examples of her stunt work: Fearless Helen.

Today, neither Helen is a household name (name known by many people), but both are certainly worth remembering for their groundbreaking (innovative; the first to do something worthy of remembering) work as action stars. If you want to see the Helens in action, many of the films are available on YouTube and can be found by searching for “The Hazards of Helen.”