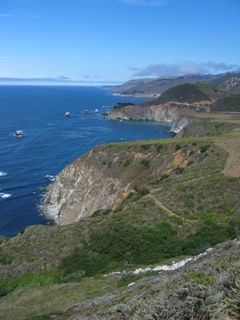 The Pacific Coast Highway (PCH) is certainly not the fastest way to travel from San Diego to San Francisco, but it is, without a doubt (certainly), the most scenic (with beautiful scenery, or views)! The PCH – California Highway 1 – is a narrow (small, not wide), two-lane highway that hugs (stays very close to) the coast (where the ocean touches the land) as it carries travelers 485 miles (780 km) from near San Diego, in southern California, almost all the way to San Francisco.

PCH is interrupted (stops for a short distance) occasionally as it winds (doesn’t travel in a straight line) its way up the coast. For the most part (usually), it treats (gives) patient (not in a hurry) travelers to beautiful views of the Pacific Ocean. It begins along the warm, sandy beaches of southern California and travels to Big Sur. There large waves crash (make a loud noise) on the rocks far below as the road hangs precariously (dangerously) from the cliffs (edge of mountain that goes straight down) near Ragged Point and crosses deep gorges (narrow valley with vertical sides) on bridges like the Bixby Creek Bridge.

In southern California, the views of the Pacific are punctuated (interrupted) by cities, like San Diego, Los Angeles, and Santa Barbara. As the PCH continues north, the cities and towns grow smaller. The view (what you see) is filled first with gentle hills and vineyards (where grapes grow) and, later, with rugged (rocky, rough) mountains and forests (place with many trees).

The PCH also carries the traveler through significant (important) moments (times) in California history. The California Missions Trail follows Highway 101, which runs parallel to (goes the same direction), and occasionally joins (comes together with) the PCH. Between 1769 and 1823, the Franciscans (followers of St. Francis of Assisi) established 21 Roman Catholic Missions (churches) beginning near San Diego and extending (continuing) all the way to Sonoma, north of San Francisco. Most of the missions have been preserved (saved; protected) and some, like Mission San Juan Capistrano, between San Diego and Los Angeles, give tourists a very real taste (experience) of what life was like in California more than 200 years ago.

If you’d like to begin to explore the PCH for yourself, start with this short video, then check out (look at) Driving California’s coast in 10 days from the Los Angeles Times or Pacific Coast Highway California from the National Geographic Traveler.

To really experience the PCH, however, you have to come to California, rent a car, and try it for yourself!

~ Warren Ediger – ESL tutor and coach, creator of Successful English, where you can learn more about how to improve your English.

photo of California coast near Ragged Point by W. Ediger