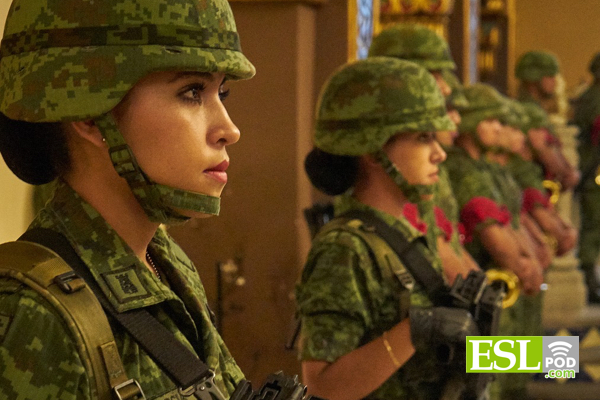 My father served in (was a member of) the U.S. Army during World War II, fighting in North Africa, Italy, France, and Germany. Like millions of other young men his age (he was 18 in 1941, when the U.S. entered the war), my father was drafted.

When we’re talking about the military, the verb to draft or to be drafted means that the government tells you – forces you – to be part of the Army or other military service.

As was the case for most men at that time, however, my dad was very willing to participate and fight. Sometimes he would sing us a song that was very popular during the war, which went like this:

“This is the Army, Mister Jones!
No private rooms or telephones.
You had your breakfast in bed before.
But you won’t have it there any more.”

The idea of the song, written by the great songwriter Irving Berlin, is that the military wasn’t going to be fun or easy.

Right now, the United States does not have a draft or any sort of compulsory military service (when you must be in the military for a certain number of years). However, teenage boys at age 18 are required by law to register with (give his name and address) the Selective Service System.

The Selective Service System is the U.S. government’s way of keeping information about men who are eligible for (meet the requirements for) the draft.

If they don’t, the government will not give them any money for college, and could arrest them and put them in prison (although I don’t think that happens very often, if at all).

I was one of the first people who had to register with the new Selective Service when I turned 18 (back when Ronald Reagan was president). But it would be unlikely the Army would want me anymore – I’m too old!

Both men AND women must register, according to this judge. Will this actually happen?

No one knows for now.

You see, there are different levels of judges in the U.S., and this was a judge at one of the “lower” levels. The U.S. government will almost certainly appeal the decision by the judge, meaning they will ask a “higher” court to overturn or cancel the decision by the lower court judge. (This happens often.)

The highest court in the U.S. is our Supreme Court, and it is very possible that the case (the legal matter) may reach it someday. But that process could take years.

The idea of drafting women is popular with men (61% want it), but very unpopular with the women themselves (only 38% want it), at least according to a poll back in 2016.

P.S. I should note that women do currently serve in the U.S. military alongside (with; next to) men, but both men and women are volunteers (doing it by their own choice).