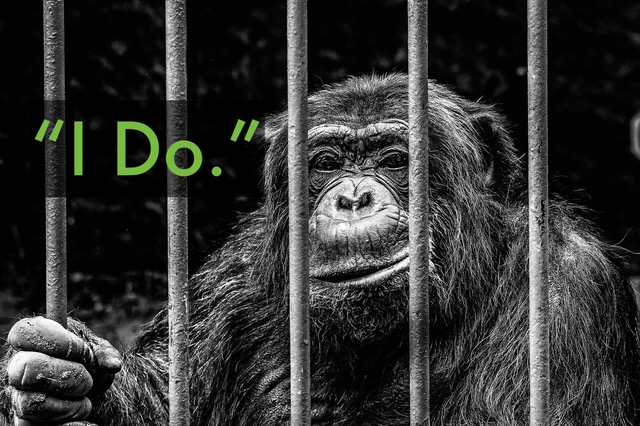 George Carlin (1937-2008) was an American comedian, a person whose job is to tell jokes or funny stories. He was a stand-up comic, someone who told jokes in front of an audience, and he was very successful.

Carlin was often very good at observational comedy, which are jokes about everyday life used to point out or show the funny things people do.

And he often made fun of the English language. Here’s one of his better jokes:

“‘I am’ is reportedly (said to be by many people) the shortest sentence in the English language. Could it be that ‘I do’ is the longest sentence?”

“I do” is one of the things we say when we get married, when saying “yes” to being another person’s husband or wife.

You know what a sentence is when we’re talking about language. But the word sentence is also defined as the length of time a person must remain in jail (prison) as a result of being convicted of (found legally responsible for) of a crime: “The bank robber received a 10-year sentence.”

So now you know George Carlin’s view of marriage: Once you say “I do,” you’ll be in prison for a very, very long time!

Carlin also made fun of human foibles, those small weaknesses or funny or strange things people do.

This is one of my favorites:

An idiot is a fool or a very stupid person, and a maniac is a crazy person who is out of control and shows wild and dangerous behavior.

Carlin is good at showing how self-centered we are. Don’t we all believe that the world revolves (moves in a circle around a fixed or fixed point) around us?

P.S. Some of you may be asking: Is “I am” really the shortest sentence in English? Well, that depends on how you define a sentence. Normally, a sentence requires a subject and a predicate. However, the subject can be understood (without it being stated), so that “Go!” and “Eat!” are also considered sentences. But we won’t go into all of that. It’s just a joke, after all.