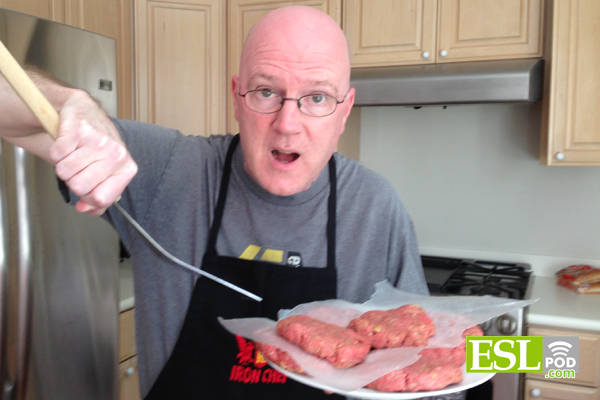 I love to cook on my barbecue (also be spelled “barbeque” or abbreviated “BBQ”) grill in the back of my house.

Here’s a photo of me getting ready go cook some hamburgers (and don’t worry, I cook them before I eat them!).

Since summertime is the part of the year when many Americans cook their food on a BBQ grill, I thought I’d share a short excerpt (small section of a book or written text) from our Daily English #829 lesson related to a few common terms used to talk about barbecues. (This lesson, plus 1,800+ more, is included in our Unlimited English membership.)

In this section, I’m talking about a conversation between two people (named George and Sophia) at a BBQ.

George says, “The meat won’t taste very good if I don’t baste it with my special sauce each time I flip it.”

“To baste” means to use a small tool that looks often like a brush to put the sauce on.

Sauce is a heavy or thick liquid, over the food so that it doesn’t become too dry.

George needs to “baste” the meat with his special sauce each time he “flips it.”

“To flip” here means to turn something over. So, if you’re cooking a hamburger, you cook one side, and then you flip it over, you turn it over, and cook the other side.

Sometimes, jokingly, we talk about people who work in hamburger restaurants like McDonald’s as “flipping burgers.” The term is also used to describe a job that doesn’t pay very well and is probably not very interesting.

Sophia says, “Okay, how about if I get the corn on the cob ready for grilling?”

“Corn on the cob” is corn, the vegetable, that comes still attached to the hard inedible – what you don’t eat – part of the plant. You take the outside of the corn off – what we call the “husk” – and you’re left with the “corn on the cob.”

The “cob” is the middle part of the plant, the hard part that you don’t eat.

“Grilling,” you probably know, means to cook something on top of this metal device called a “grill,” and is usually done outside.

Okay, now I have to go finish my cooking!

email
This entry was posted in Discussing the Episodes. Bookmark the permalink.