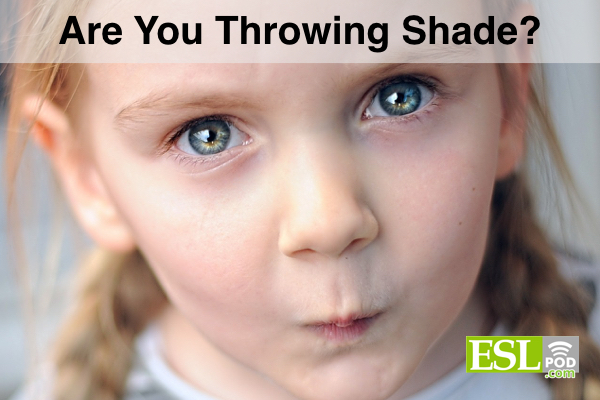 My mother used to tell us, “If you don’t have anything nice to say, don’t say anything at all.”

Not many of our public officials or politicians follow (take; accept) this advice. Not a week goes by (there is no week that passes) without someone publicly saying bad or negative things about someone else.

An informal term that I’ve heard recently for saying bad things about another person is to throw shade.

The word “shade” normally refers to the dark, cool area that appears when something gets between an object and direct sunlight. (Take a look at Cultural English 64 for an explanation of the difference between “shade” and “shadow”).

But more recently, “shade” has come to be used informally to mean “criticism,” saying or doing something to show your disapproval.

You may “throw shade” because you think something has faults (bad or unattractive parts), or because someone has made a mistake. We use the preposition “at” when we are mentioning a specific person: “He was throwing shade at his girlfriend last night.”

To throw shade, then, means to criticize someone or to put them down. (A piece of criticism is called a “put-down.”) It can be something you say, but it might also be something that you do, like an eye roll (moving your eyes in a circle, usually to show that you don’t believe someone or don’t approve of them).

Another term that is also informal and more widely used is to dis (sometimes spelled “diss”). To dis also means to criticize or to show disrespect. It can mean strong criticism or mild (not strong) insults.

Note we do not use a preposition after “dis”: “He was dissing his family.”

If you’re not happy with your job, you might dis your boss: “My boss is a jerk. He’s rude and incompetent (not having the skills he needs to do his job).”

When my brothers and I get together, we might joke around by dissing each other, making mildly insulting comments about each other. Friends sometimes do this as well  – at least, men do this to other men – but it is always done in a joking way.

I still think what my mother said is the best advice. But throwing shade and dissing other people makes for better television and sells more newspapers.