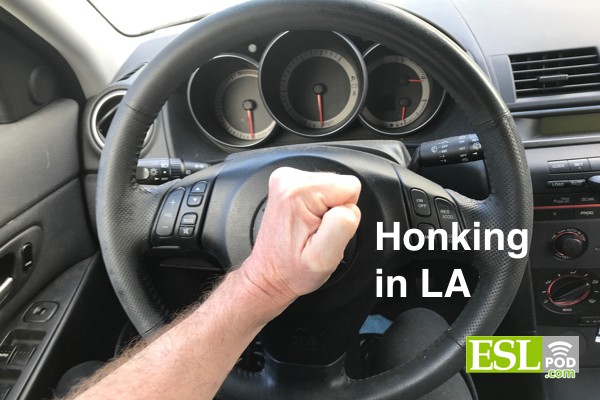 Someone who lives in Los Angeles is called an Angeleno. In Los Angeles, we Angelenos have our own personality and sometimes particular characteristics. The one I want to talk about today is feeling entitled.

In other words, you’re so good, you’re so wonderful, that the world should treat you like a King or Queen!

This is, of course, a very negative way to describe someone’s personality, but I think it really is true in the city where I live.

One of the places you see this sense of entitlement in Angeleno culture is on the freeways.

Here in Los Angeles, we spend a lot of time in our cars, and for that reason, we have some of the worst traffic in the United States. We have too many cars for too small of a space, and we don’t have a good public transportation system.

Logically, when you have a lot of people spending a lot of time in their cars and those same people feel like they’re entitled, well, that leads to (can cause) certain problems.

The biggest problem we have here in Los Angeles is when people drive, they think that they are somehow the owners of the road, that everyone should look out for (take care of) them, to do what is best for them.

Because of this, there is a lot of honking in Los Angeles. To honk means to make a loud noise with your car by using your car horn. We also use the verb “to beep your horn.”

Beeping your horn usually means you are making noise with your horn but for a short time.

Honking your horn means that you make noise for a longer time, especially when you’re angry.

When you feel entitled, you feel that everyone else should just get out of your way. This means that there are a lot of impatient drivers in LA. And they honk a lot.

This is very different in other parts of the United States. Back in Minnesota, where I’m from, people honk, of course, but it’s not considered a very nice thing to do. You don’t do it very often, and if you can avoid honking, you do.

The size of the city certainly makes a difference. Los Angeles, like New York or Chicago, is such a big city that you think, “Well, I’m never going to see these people again anyway, and so I don’t really have to care about them.”

In a smaller city or town, you may actually know the person you’re honking at, or at least see them again.

I think the size of the city is part of the reason you hear a lot of honking on Los Angeles freeways. But it’s only part it.

Another part of it, I think, is because I live in a city where being famous and being recognized is something that people value (think is very important), and that leads to a certain sense of entitlement.

Unhappily, even people who are not famous (like me) act this way. So if you ever come to Los Angeles, and you hear me honking at you, don’t take it personally – but do get out of my way!