The Shadow Wolves are on the Hunt 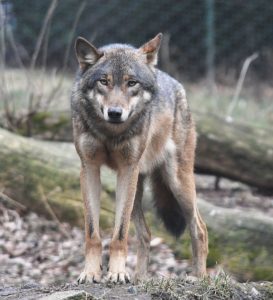 As in other countries, smuggling and trafficking are both serious problems in the United States. Smuggling is the crime of bringing something into or out of  a country illegally (against the law). Trafficking is the selling or trading of things illegally.

To combat (fight; work against) smuggling and trafficking, the U.S. has a small group of special officers with the coolest (most appealing and impressive) name: The Shadow Wolves.

A shadow is the dark shape produced when a body or object comes between the sun or a light and a surface, like the ground. A wolf (see photo) is a wild (not tame; not living peacefully with people) animal similar to a dog.

Shadow Wolves is a unit (group of officers or soldiers working together) based in southern Arizona. They are based on the Native American Nation of the Tohono O’odham. (We talked about Native American reservations here.) The Nation is located on about 4,300 square miles (11,100 square kilometers) and its people mainly live in small villages spread out (not close together) across this entire area.

There are only 15 members of this special unit, but the Shadow Wolf officers are known for their remarkable (amazing) ability to track (to find the path or course of someone) smugglers as they try to smuggle things, especially drugs, across the Mexican-American border (line separating two countries).

The unit has had a long history of tracking, skills passed down (given from parent to children) from generation to generation. The name “Shadow Wolves” refers to the way the unit hunts (follows and captures), like a wolf pack (group of animals living and/or traveling together). When one wolf finds prey (what is being hunted), it calls in the rest of the wolf pack to help capture the smugglers.

The unit has hi-tech (using advanced technology) equipment, but it relies mainly on traditional methods of tracking, primarily a technique called “cutting for sign.” “Cutting” means searching for and analyzing “sign,” which includes any kind of physical evidence, such as footprints (impressions on the ground made by feet or shoes), tire tracks (impressions in the ground made from car or other vehicle traveling over it), thread (individual long, thin pieces of fiber used for making fabric), clothing, and more. Officers may spend hours or days tracking in the field following a “sign” until they find the smugglers so they can be arrested (taken to jail by police) and their illegally transported items seized (taken).

The Shadow Wolves are able to track smugglers across difficult desert (with a very dry climate and little rain) and mountain terrain (section of land, especially its physical features, such as being smooth or rough). They can spot (notice; find) signs that most people cannot, something as small as a broken twig (small length of wood from a tree), an overturned (turned upside down) pebble (small rock), or single fibers from a piece of clothing or a bag that could be carrying drugs. From a faint (not clear or deep) footprint in the dust (fine powder in the air that collects on surfaces), they can see when the footprint was made, where they came from, and whether they are carrying a lot of weight, such as heavy bags filled with drugs.

The Shadow Wolves have traveled around the world to teach officials and police officers how to detect and follow tracks. In recent years, the Shadow Wolf officers have seized an average of 60,000 pounds of illegal drugs a year.