Which Dog Will You Feed? 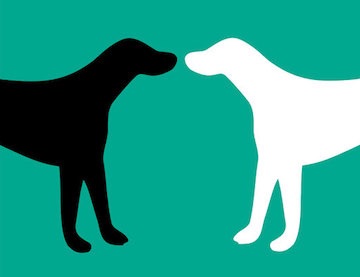 I heard an echo (something you hear again) from the past a few days ago. From my childhood, actually.

When I was young, I remember hearing a story – first told, I believe, by a religious leader named Billy Graham – about a fisherman who used to bring his two dogs – one white, one black – to town every Saturday afternoon. He had taught the dogs to begin fighting whenever he told them to. The town-people would make bets (pay money to say) on which dog would win. One Saturday the black dog would win. The next Saturday the white dog would win. And the fisherman always won!

One day one of his friends asked how he always knew which dog would win. “It’s easy,” he replied, “I starve (don’t feed) one and feed the other. The one I feed always wins because he is stronger.”

The way I heard the story is that we all have both good and bad in us. The part we feed will dominate (control) us.

I heard an echo of that story a few days ago while reading a blog post by Seth Godin. Godin is a really smart guy. He’s written 18 best-selling books, started two businesses, and writes a daily blog followed by many.*

What I like about Godin, and the biggest reason I read his blog, is that he is also wise: he has good sense (understands what is important) and judgement (ability to make good decisions) that he’s learned from his many life experiences.

In his blog post, Godin suggests making two lists on two pieces of paper. The first is a list of negatives – people who don’t like you, bad things that have happened to you in the past, bad situations that you’re experiencing now, and things like that.

The second is a list of positives – like things you know, good experiences that you’ve had, people who trust you, what’s working for you now, and what’s worked for you in the past.

When you finish the two lists, Godin says to choose one of them and put it somewhere you won’t see it. Once a week, take it out and look at it. Put the second list somewhere you can see it and read it every day.

Personal note: The next few months are going to be very busy for me, so I’m going to be taking a break, at least until the end of September. Hope you have a great summer!

* Editor’s note: Godin’s blog is so popular, you can find it by just typing “Seth” into the U.S.’s Google search engine.

3 Responses to Which Dog Will You Feed?