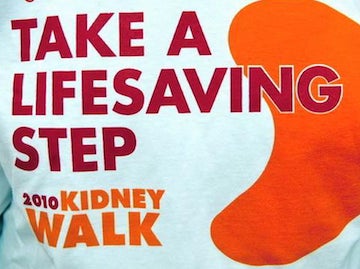 Have you ever thought about giving one of your kidneys – the part of your body that cleans your blood – to a stranger, to someone you don’t know?

Scientific progress has made it easier and safer to transplant organs – to move a healthy heart, liver, kidney, or other organ from someone who has died to a living person who needs it. In 2015 about 31,000 transplants were performed in the U.S.

That’s a large number. But the number of people waiting for transplants of all kinds – almost 120,000 – is much larger, and a new name is added to the list every 10 minutes. Even though transplants save or improve the lives of 85 people every day, 22 others die because they can’t get one.

Our kidney’s main job is to clean our blood. When it works well, we don’t think about it. When it doesn’t, we often have to go to the hospital or a clinic several days a week for dialysis, using a machine to do what a sick kidney can’t do.

We are born with two kidneys. And we can easily live with only one. That’s why many people are making the decision to donate (give) a kidney to a stranger.

Last year, Dylan Matthews, a young journalist (news reporter), gave one of his kidneys to a man he’d never met.

Matthews says that he’d thought about giving one of his kidneys for years. “It seems,” he writes, “like such a simple and clear way to help someone else, through a procedure (process) that’s very low-risk (safe) to me.”

Matthews points out that if he “kept walking around with two kidneys when there are more than 100,000 people on the kidney waitlist (waiting list) who would most likely die in the next five years if they didn’t get one,” he would be like someone who sees a child drowning (die from being under water) in a pond (small area of water) but doesn’t do anything because he doesn’t want to get his clothes wet and dirty.

Matthews became friends with one person who had become a donor, then another. And after talking with them he decided that the facts were simple: “it’s awful to need a kidney and really not that hard to give one.” And so, in 2016, he did.

The process took about five months. Testing started in March, was finished in mid-May, and in June he was approved as a donor. On Monday, August 22, he was admitted to (entered) Johns Hopkins hospital so his left kidney could be removed.

The first few days of recovery (return to normal) were difficult. But Thursday, three days after surgery, he went home. On Friday he went out with friends, and on Saturday, he and his father went to a movie.

Matthews says that “giving a kidney was the most rewarding experience of [his] life.” He talks about the choices we make – especially when we’re young – some good, some bad. He believes that this decision was one of his best. “I was…deeply gratified (thankful) to have made at least one choice in my life that I know was beyond a shadow of a doubt (absolutely) the right one.”

Note: The title for this blog post comes from Briana Zavala, a young kidney donor from California, who encourages people to “share your spare (extra)” kidney.