Tips on Printing Your Own Money 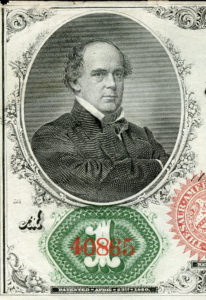 What do you do if you’re the U.S. government and you’re short on (don’t have enough) money? You just print it, of course.

During the U.S. Civil War (1861 to 1865), the federal (national) government was nearly broke (without any money). Before 1861, the U.S. did not have paper money as we know it today. Instead, people used government coins (metal money) or banknotes, which were pieces of paper issued by (produced by) banks as a promise to pay the person holding the banknote in “real” money – metal coins.

Historically, in most places government-issued paper money had always been backed by, or represented the value of, some amount of precious (valuable) metal, such as silver or gold. But since the government needed money to pay for things to fight the war, President Abraham Lincoln decided simply to print paper money even though the government did not have metal money to back it up. The paper money was instead backed by the trust one had in the U.S. government.

The mastermind (person with the smart or clever plan) behind the printing of paper currency (money of a country) was Salmon P. Chase, then Secretary of the Treasury, the part of the federal government responsible for the country’s money. Chase was also a very ambitious (wanting very much to succeed) politician. To give himself more attention, Chase put his own portrait (image of a person’s face and shoulders) on the United States’ first dollar bill (see photo), called “greenbacks.”

Chase’s greenbacks helped the government avoid financial ruin (complete destruction), but they had a major problem. Because they were produced quickly and weren’t well thought out (planned), it was easy to counterfeit (copy; produce fake versions). By the end of the Civil War in 1865, one in every three bills was fake (not real). At some points during the war, a dollar bill was only worth 34 cents due in part to counterfeiting (100 cents = 1 dollar), although the lack of a gold or silver standard (backing) contributed to this as well.

President Lincoln understood this problem. On April 14, 1865, he created the Secret Service to purge (eliminate completely; get rid of totally) the country of counterfeit bills. Ironically, it was later that same day that Lincoln was shot. The two events were not connected, however.

How much of the United States’ currency today is counterfeit?  Only one bill in 10,000 – or at least, that’s what the U.S. government says, if you trust them.

15 Responses to Tips on Printing Your Own Money