Saying “It’s a Thing” Is Now a Thing 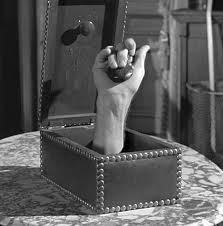 According to one source, “thing” is among the ten most commonly used nouns in English. It’s so common that if you are able to read this blog post, you probably already know what it means. Or do you?

Certainly you know that “thing” can refer to just about any inanimate (not living) object, such as a cup, a car, or a coin.

You can also use “thing” when you’re not sure if the object you’re referring to is living or not. For example, you might say to a waiter in a restaurant, “What’s that thing in my soup?” (Hint: If you have to ask this question, you might not want to eat at that restaurant again.)

“Thing” can also refer to a topic of conversation, as in “I have three things I want to talk to you about today.” Notice that “thing” can be singular or plural when used in these ways.

More recently in U.S. English, “a thing” (always singular) has taken on a new meaning, referring to a newly popular topic, trend, or activity.

For example, eating toast with avocado on top is now “a thing” in many U.S. cities. It’s a relatively recent phenomenon that is especially popular among hipsters.

Saying that you will move to Canada if _________ wins the presidency in November is also a thing among celebrities (fill in the blank with the candidate you hate the most here (Donald Trump, Hillary Clinton, Bernie Sanders, Attila the Hun, etc.)).

Sometimes the trend is so crazy, you may ask someone, “Is that really a thing?” For example, I might ask my friend, “Are adult coloring books really a thing now?”

The answer to that last question is yes, they are: people are actually spending time coloring paper books like children. Sadly, it is a thing.

P.S. Oh, here’s one more meaning of “thing” – it was the name of a character on The Addams Family TV show from the 1960s, which is shown in the photo.