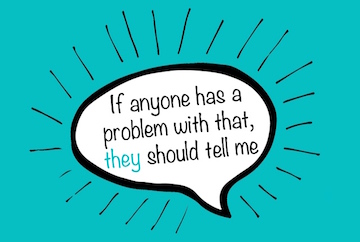 Here’s a short quiz for you: Which pronouns would you use to complete these sentences?

There’s been a lot of discussion and debate (argument) about what to do when the subject of a sentence like “someone” is indefinite (not masculine/male or feminine/female), or when a subject like “students” could be masculine, feminine, or both.

If you look in a grammar book, you’ll find suggestions like these:

Many famous writers – Shakespeare, C.S. Lewis, Jane Austen, and others – often ignored (didn’t do) what the grammar books said to do. They used different forms of what we call the “singular they.” If we use the singular they in our two sentences, they look like this:

1. Someone left their lunch in the office. Would they please come get it?
2. When a student wants to study, they should try to find a quiet place.

The singular they has been discussed and debated for a long time. But in 2015, organizations like the Associated Press (a news organization) and the Washington Post newspaper added the singular they to their style guides, books that tell their writers what is okay and what is not. Many dictionaries – including my two favorites for English learners, the Longman Dictionary of Contemporary English and the New Oxford American English Dictionary – have added the singular they. And just a few days ago, the American Dialect Society (a dialect is the form of a language used in a particular place or by a particular group of people) voted the singular they as their Word of the Year.

Let’s look at another example to see how the singular they makes the writer’s and reader’s work easier. First, here is a sentence that uses personal pronouns in two different ways:

Now, here is the same sentence using the singular they:

3. Everyone agreed that they would bring their lunch with them.

I think you’ll agree that the singular they makes both writing and reading easier.

The story of the singular they reminds of us that language changes as people use it in new and different ways. Dictionaries, which describe how a language is being used, will add those changes at some point (time). However, the best way to keep up with changes is to do the same thing you do to improve your fluency (ability to use a language): do a lot of reading. You will acquire (pick up) most new uses automatically, without trying.

11 Responses to The Other “They”