Why is President Franklin D. Roosevelt Wearing a Dress? 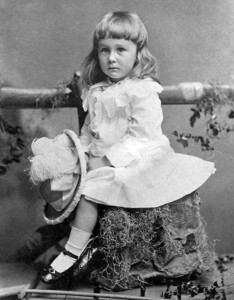 For an American parent, it is difficult to buy any item for their child, no matter how young, without running into (meeting) a clear dichotomy (split into two): boy or girl?

But it hasn’t always been this way. The photo you see in this post is of President Franklin Delano Roosevelt when he was two and a half years old. Yes, that is a boy.

It seems strange for us now to see a boy with his hair long and styled (fixed) in this way, wearing a dress, and with a big frilly (with a lot of decoration) hat with feathers. But in 1884 when this photo was taken, it was the norm (usual thing to do).

Historian Jo Paoletti says that before the World Wars, children were dressed in white dresses like these with white diapers (cloth or other material wrapped around a baby’s or young child’s bottom for going to the bathroom) for convenience. It was easier to change children’s diapers when they were wearing a dress, and the color white allowed for bleaching (the use of a chemical to make fabric white if it gets dirty or stained).

Both the wearing of the white dresses and the long hair were typical (normal) until age six or seven, when children had their first haircut. Believe it or not, this outfit (set of clothing and accessories) was considered gender-neutral (not indicating whether a person is male or female).

And the color pink for girls and blue for boys didn’t become the trend until just before World War I. Before that time, many people actually considered pink the masculine (related to men and strength) color and blue the feminine (related to women and delicacy) one. Some of the major department stores (large stores with many departments including clothing, shoes, make-up, and housewares (things used in the kitchen or home)) even published guidelines during this period for dressing children, suggesting blue for girls and pink for boys.

Eventually, in the 1940s, clothing manufacturers began making more pink clothing for girls and blue for boys, reflecting (following) what they believed were customer preferences. Who knows how color conventions (what is considered normal and socially accepted) will be in 100 years?

Are pink and blue the colors associated with boys and girls where you live? What associations are attached to these and other colors?

30 Responses to Why is President Franklin D. Roosevelt Wearing a Dress?