Where Buffalo Used To Roam 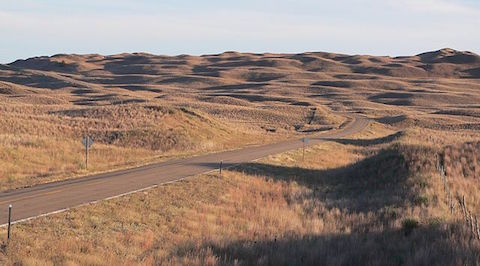 Home on the Range (land covered by grass) – an old song from the American West – begins like this:

Oh, give me a home where the buffalo roam (wander; move from place to place),
Where the deer and the antelope play,
Where seldom is heard a discouraging word
And the skies are not cloudy all day.

The Great Plains is a large area of land in the middle of the U.S. covered by mostly by grass and farms. The Plains begin in Texas and go all the way north into Canada. There are no mountains there. Instead there are miles of flat land and what we call “rolling” hills that gently rise (go up) and fall (go down) as you drive through them.

The state of Nebraska, where I lived before moving to California, is in the middle of the Great Plains. When you drive across Nebraska from east to west, you’ll drive through the city of Omaha, then pass mile after mile of corn fields until you reach the middle of the state. When you get there, you will have arrived at the area that the songwriter might have been thinking about – the Nebraska Sandhills.

The Sandhills are exactly that, about 20,000 square miles (~52,000 square kilometers) of grass-covered hills of sand. If you leave the freeway, you can drive many miles without seeing another car or truck. But what you will see are ranches (farms where cows are raised) with large herds (groups) of cows and a few small towns.

In the small towns, you’ll find the essentials (things that are necessary) but not much more – groceries, ranch supplies, gas for your car or truck, a church or two, a bar or two, and possibly a small hotel.

It doesn’t rain much here, but there is a large amount of underground water for ranchers to use for themselves and their cattle (cows). And the cattle, mostly Black Angus (a kind of cow), provide Nebraska and the rest of the country with some of the finest beef (meat from cows) you can eat.

The deer are still there. And so are the antelope. But not so many buffalo; many of them were hunted by the American Indians and early Americans for food and for their skin, which was used for clothes.

They say the sky is bigger in the Sandhills. And the sunrises and sunsets are more beautiful. During the summer, it’s not unusual for fast-moving summer storms to form (appear and grow) and fill the sky with towering (very tall) clouds that quickly change from white to gray to black.

People who know the Sandhills talk about how peaceful it is there. Ron Scheer, a California professor, writes that “the Sandhills provide an endless supply of peace and quiet…. The best moments are spent just listening to … the birds singing from every direction, and the wind.

To learn more about Nebraska and the Sandhills, I encourage you to watch two short videos. The first, My West: The Sandhills of Nebraska, is by Professor Scheer. The second, Nebraska Skies, is by Bill Frakes, a well-known photographer.

Photo of the Nebraska Sandhills courtesy of Wikipedia Commons.

18 Responses to Where Buffalo Used To Roam