So Go Ahead and Sue Me, Taylor Swift 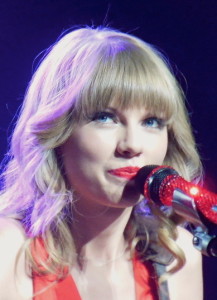 I can’t say that I have never, never, never listened to a song by Taylor Swift, but I can say that I’m not exactly (I’m not really) a fan of her music. Ms. Swift is, however, extremely popular in the United States and internationally, known for her catchy (easy to remember) tunes (music) and lyrics (words to a song).

But if you’re not careful, Swift may just decide to sue you (take you to court and demand money from you for something you did wrong). Here’s why: Swift has trademarked (legally protected) some of the most popular phrases from her songs, claiming (saying) that these phrases are her intellectual property (things you create that belong to you). And if you use them without her permission, she will take you to court (sue you).

What phrases are we talking about here? None that you or I will probably ever use, to be honest. But just to be safe, here’s a list of some of the phrases that you should avoid using without young Taylor’s permission (and if you do, you should put the official trademark symbol – ™ – on them):

The reason behind Swift’s trademarking of these phrases is not just meglomania (the desire to dominate everyone around you, to have great power). Some say she has a legitimate (logical, legal, and/or defensible) reason to be concerned about other people taking her phrases and using them to make money, by putting them on things such as T-shirts or handbags (purses).

You might be wondering about whether we here at ESL Podcast have trademarked anything. The answer is yes: ESLPod™ is a registered trademark. But if Swift wants to use it in one of her songs, she has my permission, cuz (because) we hope never to go out of style.

20 Responses to So Go Ahead and Sue Me, Taylor Swift