On the Twelfth Day of Christmas, My True Love Gave To Me 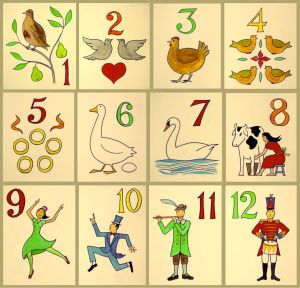 In the U.S., you start to hear Christmas music played on the radio after the late November holiday of Thanksgiving, and you continue to hear it all the way through the month of December. By New Year’s Day, the radio stations stop playing Christmas music. For most people, Christmas is “over,” finished. Time to get back to work!

But traditionally (and still in other countries around the world), the celebration of Christmas begins on December 25th, and doesn’t end until January 6th. January 6th is celebrated under different names depending on the culture and particular Christian group you’re in, but most people who know about it in the U.S. associate it with the “Three Kings” or “Three Wise Men” or “Epiphany” (for the story, see here).

Most people (including me) can remember the first five verses (sections) of the song, corresponding to (relating to) the first five days of Christmas, but can’t remember the rest of the verses. So below are the “gifts” for all 12 days and an explanation of them.

If you are not familiar with the song, you’ll want to watch a video of it also (see below).

Here then are the 12 gifts (look at the image above also to help you):

To really appreciate the song, you have to listen to it. Here is a video with the music and images of the different gifts.

Do you have this song in your language (or a similar version)? Has anyone ever given you seven swans a-swimming or ten lords a-leaping?

24 Responses to On the Twelfth Day of Christmas, My True Love Gave To Me