Learn From George, Not Pinocchio 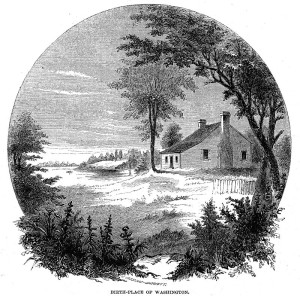 Did you break this lamp? No.

Where is your homework? My dog ate it.

We all want our children to be truthful (honest; not telling lies). Let George Washington, not Pinocchio, be your teaching tool.

You have probably heard the story of George Washington and the cherry tree (see English Cafe 275). When George was a boy, he used his hatchet (sharp tool with a handle) to cut down his father’s favorite cherry tree. When his father asked him if he had done it, he said, “I cannot tell a lie. I did it with my little hatchet.” Most historians don’t believe this actually happened, but it is a story many American children are told to show the virtues (benefits of having a high moral standard) of honesty (telling the truth).

The story of Pinocchio is probably even more well known. Pinocchio is a character from an Italian children’s novel (book), and the story is known in many countries. Pinocchio is a puppet (toy moved by strings) made by a man named Geppetto. Each time Pinocchio tells a lie, his nose gets longer. This story is often told to children to show the negative consequences (results) of telling lies.

In a recent study, researchers who have spent years studying children and honesty set up a situation where it would be easy for children to lie: namely (specifically), a chance for children to peek (look when they are not supposed to) to get the right answer to a question when the researcher leaves the room. Before asking the children, ages 3 to 7, if they had peeked, the researchers told them a story. The children heard one of three stories: the story about George Washington, the one about Pinocchio, or an unrelated story. After hearing the story, the children were asked if they had peeked.

Nearly all of the children peeked, and about 65% of the them lied about it. But those who had heard the George Washington story lied significantly less. The researchers interpreted this to mean (believed it meant) that children responded better to being told the benefits of telling the truth than the negative consequences of lying.

Maybe there’s a lesson here for handling our politicians? Maybe Washington, D.C. (our national government) should have enforced (required) story time (when an adult reads aloud to groups of children).

14 Responses to Learn From George, Not Pinocchio