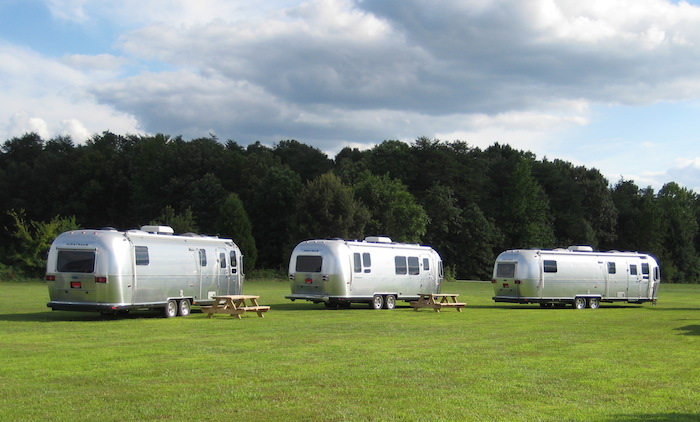 It’s summertime. Vacation time for most people. And for many Americans, RV time.

There are close to 10 million recreational (an activity done for enjoyment) vehicles, or RVs, in the U.S. RVs are motor vehicles or trailers (a vehicle pulled by another vehicle) with living space and some of the amenities (useful or desirable things) that you enjoy in your apartment or house.

Some RVs are as big as a bus. They have their own motor, a kitchen, bathroom, bedrooms, and many other conveniences (things that make life easy). Others are small enough to pull behind a motorcycle, with only enough space for one or two sleeping bags and supplies for outdoor living.

Most RVs are used for vacations and camping (to visit an area and, usually, stay outdoors). When they’re not on the road (driving) you’ll usually find them in RV parks (places where people with RVs can stay overnight or longer) and campgrounds (places for staying overnight outdoors).

No RV has become more a part of Americana (things associated with American history or culture) than the Airstream travel trailer created by Wally Byam. In 1931, Byam dreamed about making a “travel trailer that would move like a stream (smooth, steady movement) of air, be light (not heavy) enough to be towed (pulled) by a car, and create first-class (the best kind) accommodations (a place to stay or live) anywhere.”

Byam began to bring his dream to life in 1931 when he opened his first factory in California. Travel trailers were becoming popular and demand (need or desire for something) grew quickly in spite of (wasn’t affected by) the Great Depression (serious economic problems during the 1930s). World War II interrupted (stopped for a time) the growth of the travel trailer industry, and Byam and many of his employees went to work in aircraft factories in California.

When the Airstream factory reopened (opened again after being closed) after World War II, Byam applied (used) many of the things he had learned from making airplanes to the design and manufacture of the sleek (with a smooth attractive shape), streamlined (shaped to move easily through the air), silver travel trailers Airstream is known for.

A few years after the war, Byam and his friend Neil traveled across Europe in one of his Airstream trailers. That experience gave Byam a new dream and opened the door to (led to; resulted in) a new chapter (part) in the Airstream story.

In 1951, Byam used the Los Angeles Times newspaper to invite other travel-trailer lovers to join him in a caravan (a group of people or vehicles that travel together) from Texas in the U.S. to Nicaragua in Central America. He hoped for 35. He got 63. Unfortunately, only 14 finished the trip. The rest dropped out (stopped doing something) because of bad roads, bad weather, and mechanical problems.

Byam died of cancer in 1962, but his dreams didn’t. Airstream continued to design and make travel trailers that were ahead of the times (advanced). And his dream of helping people enjoy the travel experience continued to grow, thanks to the Wally Byam Caravan Club International, which he started in the 1950s. Especially during the 1970s and 80s, Airstream and the Club held many rallies (large public meeting) and caravans around the world.

Airstream is 80 years old now, and the Caravan Club is 55 years old. Both of them continue to help Americans and people around the world experience and enjoy the dream Wally Byam had so many years ago.

Note: Historical Airstream information was taken from the Airstream web site, where you can learn more and see photos of Airstream travel trailers.