A New Kind Of Streaker 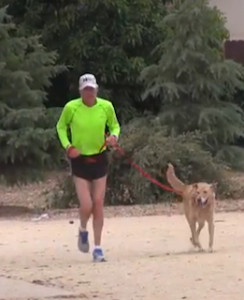 Americans who remember the 1970s probably remember streakers – usually students – who ran naked (without clothes) in public places as a joke or to shock (surprise and upset) people.

Today there’s a new group of streakers. At least that’s what some of them call themselves. But as far as I know, none of them has taken off their clothes to do what they do.

A streak is a period of time during which you continue to be successful or to fail. In sports you hear a lot about streaks, and there have been long ones. Cal Ripken, a well-known American baseball player, played 2,632 games without missing one. That’s an impressive streak!

From 1996 until 2007, the Caltech (California Institute of Technology) Beavers basketball team lost every game they played – 207! That’s not an impressive streak!

Jon Sutherland is one of the new breed (particular kind of person or type of thing) of streakers. He is a streak runner. To be a streak runner, you must run at least one mile (1.6 km) every day under your own power (without any mechanical help), but treadmills (a machine for walking or running in the same place) are okay.

Years ago, one of Sutherland’s friends told him that he had run every day for a year. So Sutherland decided to try it, too. The first year was “no big deal (not so important)”, he says. And pretty (very) soon one year became five, then 10, 15, and now 45 years.

Sutherland’s commitment (a promise to do something) to running have helped him continue to run in spite of (without being stopped by) 10 broken bones, including a broken hip, and arthroscopic surgery – surgery in which doctors insert very small instruments (tools) into small incisions (cuts) so there is less damage and the patient heals (becomes healthy again) faster – to both knees.

Sutherland has a simple explanation for why he runs – “I keep running because I like it. The first thing I think about when I get up every morning is, ‘Where are me and Puck (his dog) going to go? Where are we going to run today?” Sutherland is retired (doesn’t work) now, and he plans to run as long as he can, though he doesn’t run as far every day as he used to. “As long as I’m healthy, I’m going to keep going,” he says. “I’m addicted (not able to stop) to running. It’s all I do.”

If you’d like to read stories of other streak runners, look at The People Who Can’t Not Run. And if you’d like to hear Jon Sutherland tell his story, watch this short video from the Los Angeles Times.

Are you working on any kind of streak – it doesn’t have to be running?

Since I read Jon Sutherland’s story, I’ve been pushing (strongly encouraging) my students to become streak readers – to read every day, without missing a day – to improve their English.

Photo of Jon Sutherland and Puck is a screenshot from the YouTube video by Los Angeles Times.

13 Responses to A New Kind Of Streaker