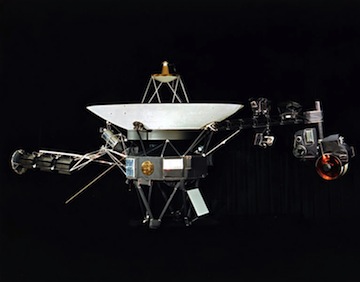 The Voyager I spacecraft was launched (to send a spacecraft into the sky) into space almost 36 years ago, in September, 1977. That was the year Jimmy Carter became the 39th president of the U.S. The year the Apple II, Atari, and Commodore personal computers first went on sale. The year Elizabeth II celebrated her 25th year as Queen of England. The year Elvis Presley died. And the year the first Star Wars movie was released.

Since its launch, Voyager has traveled more than 11.5 billion miles (about 18.5 billion kilometers). It flew by Jupiter in 1979 and Saturn in 1980 and collected important information and photos of both planets. But it didn’t stop there. It has continued to fly toward interstellar (among the stars) space. But to the surprise of many scientists, Voyager still hasn’t reached interstellar space. Rather, it’s “entered a region (area) that no one expected and no one can yet explain,” according to a New York Times article.

What has happened to Voyager is like walking out of your house to go into the backyard to play. But when you step out of the house, you enter a porch (an entrance at the front or back of a house with a floor and roof but no walls) you didn’t know was there. And the porch turns out to be much larger than anyone would have expected. In other words, the exit wasn’t where scientists expected it to be.

Voyager’s experience tells us that our solar system (our sun and its planets) is much larger than anyone imagined. Voyager has traveled more than 36,000 miles per hour (about 58,000 kph) for almost 36 years – more than 11.5 billion miles – and it’s only gotten to the back porch of our solar system, not yet into the backyard of interstellar space. Rebecca Rosen, writing in The Atlantic, says that “the hardest thing to wrap one’s mind around (think about and understand) in astronomy … is scale: just how big … objects are, how far away they lie, and how long ago they formed (started to exist).”

Rosen tells the story of Ron Miller, a space artist. While looking at a photo of the moon over Death Valley, a part of the Mojave Desert in eastern California, he wondered what would happen if he replaced (removed one thing and put in another) the moon in the photo with each of the planets. He calculated (used numbers to find out) how large each planet would be in the photo if it were the same distance from earth as the moon. Then he scaled (made larger or smaller) each planet to the correct size and put them in the photo in place of the moon. You can see the results here.

Imagine sitting in your backyard watching Jupiter or Saturn rise after the sun goes down. Or imagine the blue glow (soft light) of Neptune or Uranus while driving through the countryside (rural area) at night. How would you feel if one of the planets appeared on the horizon (the line where the earth meets the sky) rather than the moon?

*exit = the way out of a room, building, airplane, etc.; the place where vehicles can leave a freeway (high-speed road) and connect with another road

8 Responses to Where’s the Exit*?