No Longer An Ugly Duckling 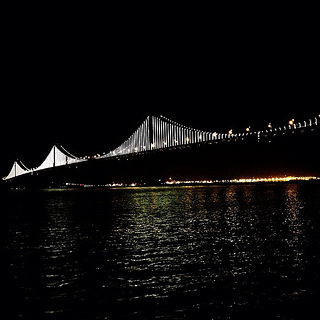 Do you know the story of The Ugly Duckling? It’s a children’s story by Hans Christian Anderson that tells about an ugly little bird who is picked on (treated badly) by the other animals in the barnyard (area for animals on a farm). When he grows up, he is delighted, and the other animals are surprised, to discover that he is a beautiful swan.

When the Bay Bridge was finished in 1936, the city celebrated with fireworks and an air show. A few months later, when the red-painted Golden Gate Bridge was finished at the scenic (surrounded by beautiful countryside) end of San Francisco Bay, it quickly became a popular tourist attraction, and people seemed to forget about the longer and busier Bay Bridge. When people do think about it, according to one writer, they think about it “as a headache for commuters and a place not to be in an earthquake.” In short, the Bay Bridge became the ugly duckling of San Francisco bridges.

On March 7, at dusk (after the sun goes down and the sky is becoming less bright), the ugly duckling was transformed (changed in a way to make it more beautiful) into a beautiful swan. That’s when artist Leo Villareal switched on The Bay Lights, and turned the bridge into one of the world’s largest public art works.

The Bay Lights consists of (is made up of) more than 25,000 white lights attached to the vertical (up and down) cables (wires) that support the two-mile span (length) of the bridge. Each of the lights is controlled by a computer program written by Villareal. They change constantly (all the time) to reflect (look like; be similar to) the different kinds of movement – boats, water, traffic, and clouds – around the bridge.

You’ll be able to see The Bay Lights for the next two years. After that, the lights will have to be taken down so the bridge can be painted again. The project cost about eight million dollars and was paid for by private donations (money given by people and businesses). City officials expect it to attract (make people come to see it) more than 50 million viewers and bring about 100 million dollars to the local economy. Restaurants facing (having a view of) the bridge have suddenly become very popular. And tour boat operators have created tours so that people can see The Bay Lights from the water.

The Bay Lights is an example of what we call public or environmental art. One of the purposes of this kind of art is to help people see everyday objects, like buildings, bridges, or parks, in a different or unusual way. Examples of public art in other American cities include the New York City Waterfalls and Cloud Gate in Chicago.

You might not be able to go to San Francisco to see The Bay Lights, but you can experience it through this short video from The New York Times or this one from the University of San Francisco.

11 Responses to No Longer An Ugly Duckling