Lunch At The Top 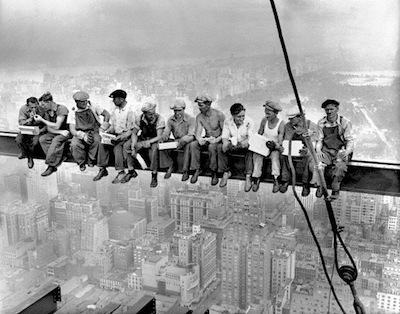 In October, 1932, the U.S., like much of the world, was in the middle of the Great Depression. It was the worst economic time of the 20th century. Many Americans didn’t have jobs. And many of them had to get their food from soup kitchens or bread lines (places where food is given for free or at a low price).

Eighty years ago, on October 2nd, 1932, the New York Herald Tribune newspaper published a photograph that has become one of the most famous photos in American history. It shows eleven men relaxing, casually eating lunch, smoking cigarettes, reading newspapers, and chatting (talking) with their friends. However, nothing else about the photo is usual.

The eleven construction workers (people who build things) are seated on a steel beam (a piece of a building; part of the frame or skeleton) which appears to float (stay in the air without anything to hold it up) above the city of New York. You can even see Central Park behind the men, in the top right corner of the photo. The beam, which is more than 800 feet (244 meters) above the ground, is a part of the Rockefeller Center, one of the most famous buildings in New York City. Construction on the Center started in 1930 and was completed in 1939.

This photo, which has come to be known as Lunch Atop (on top of) a Skyscraper (a very tall building), has become an American icon (a person or thing that represents or becomes a symbol of something). It represented hope for workers in the middle of the Depression and the difficult, dangerous work that many of them did to earn money for their families. It represented opportunity: the men in the photo are probably all immigrants – Irish, Italian, Newfoundlanders – and members of the Mohawk Native American tribe. And it represented the optimism and progress that helped lead America out of the Depression. When we look at it today, it continues to represent those same ideas.

We also don’t know the names of the men sitting on the beam. Over the years, people have said, “That’s my uncle,” or some other relative, but it’s been impossible to confirm (make sure about) any of those claims. Last year, an Irish filmmaker named Sean O’Cualain found evidence that might help identify the men at each end of the beam, but we still aren’t sure.

As an amateur (not professional) photographer, I’m impressed by what the photographer had to do to take the photo. The camera was large and heavy and probably needed to be placed on a tripod (a stand to hold it). The photo was taken on a heavy, fragile (easily broken) piece of glass, not the plastic film that most of us used before the beginning of digital photography. And remember, this is 800 feet above the ground!

You can learn a lot about American history and life in the U.S. at the time of the photo by going to the Lunch in the Sky web site. On this page you will find links – Lifestyle, Sports, Politics, etc. – that take you to short video clips (short pieces of video or film) and photos about each topic. The Architecture link includes a clip filmed near the top of the building. It’s scary if you’re afraid of heights (high places)! The last link – Film – tells the story of Sean O’Cualain’s film about the photo.

8 Responses to Lunch At The Top