Help Us Win a Macmillan Love English Award for 2011 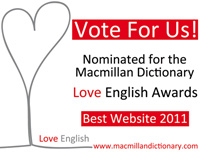 The Macmillan Dictionary company holds (has) a contest each year to determine the best English language website and blog on the Internet. This year, ESLPod.com and the ESL Podcast Blog have been nominated for the best website and best blog!  We are happy to be nominated, but we need your help to win.

If you believe we have the best English language website and blog, please vote for us!  It’s easy and will take less than one minute to do.

To vote for us for the best website, click here and look for “ESL Pod.” (Do not vote for “English Cafe.” That is not our website.)

To vote for us for the best blog, click here and look for “ESL Podcast Blog.”

Voting is simple: Just find our name and click on the “Vote” box.  That’s all you do!  You don’t have to give your email or sign-up for anything. Voting ends on January 31st, so vote today before you forget!

The most important reward for us here at ESL Podcast is knowing that we are able to help people improve their English. Because of this, we don’t normally pay much attention to awards, but since these awards are chosen by the users — people like you — we do care what you think!  So vote and wish us luck!

email
This entry was posted in Announcements. Bookmark the permalink.