Let’s Go to the Mall! 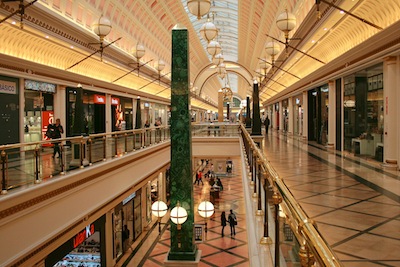 Whether people intend (plan) to buy or only window-shop (look without buying), shopping malls have become popular destinations (places to go) around the world. “Let’s go to the mall,” is heard often in many households (people who live together, usually families) and many languages.

An article on The New Yorker web site tells the story of Victor Gruen, the man many people call the creator of the modern shopping mall. I was fascinated by his story and by the “science” of mall design.

Gruen grew up in Vienna. As a young man, he studied architecture (the design of buildings) during the day, and performed with his friends in cabarets (restaurants or clubs with live music and dance performances) in the evening. In 1938, he immigrated from Germany to the U.S. to escape Nazi persecution (cruel treatment) of the Jews. When he arrived in the U.S., he said he had “an architect’s degree, eight dollars, and no English.”

One day Gruen went for a walk in downtown New York and met a friend who wanted to open a leather-goods (products, like purses, made from leather) boutique (a small store selling fashionable products) on Fifth Avenue, a popular location for exclusive (fashionable and expensive) shops. Gruen agreed to design the shop and came up with a new idea that some called a “customer trap” – an area to attract customers and pull them into the store. Let me explain.

Up until this time, the fronts of most stores were flat. Gruen changed that. He created an open space outside at the front of the store – shaped like a “U” – with glass cases to display (show) the products. He also added special lighting and a special floor. Many customers who walked into this space – called an arcade – to look at the products continued into the store to buy something they first saw outside.

Gruen began his most famous project – Southdale in Edina, Minnesota – more than 50 years ago. It was the first of the modern malls. There were no windows on the outside; the fronts of all the stores faced (looked toward) the inside of the mall. The entire mall – with 72 stores – was under one roof and it was heated and air-conditioned. Gruen put the stores on two levels connected by escalators (moving stairs) and added two levels of parking outside the mall. In the middle of the mall he created a kind of town square with a fishpond, artificial (not live) trees, a cage of colorful birds, hanging plants, and a cafe. It was, according to news stories, a sensation (exciting, very interesting)!

I’m always fascinated by why things are done a certain way. The “science” of mall design used by Gruen – his reasons for doing things the way he did – has been borrowed and further developed (added to) by other mall designers. Here are some of the popular mall design ideas:

Modern designers have experimented with many new ideas. The next time you visit a mall, take time to look around. See if you can identify some of the things the designers have done to give you a good experience and, of course, to encourage you to buy … buy … buy …!

17 Responses to Let’s Go to the Mall!