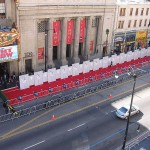 Summer is in full swing (in the middle of something, usually with a lot of activity) and the summer blockbusters, or those movies likely to make a lot of money, are out. I recently read an interesting story about Hollywood films becoming popular in countries that have, in the past, not been very interested in them. These new opportunities for new customers (or audiences, in this case) are often called new markets or emerging markets.

I thought I’d take just one paragraph from this article and explain some of the terms:

“Box-office growth in countries such as Russia, Brazil and China (Europe and Japan have long been fertile ground for American movies) comes as theater attendance in the U.S. and Canada has flattened and once-lucrative DVD sales have plummeted.”

A box-office is the place where we buy movie, play, and other performance tickets, so this term is used to refer to how many tickets are sold.  If a movie has a big box-office, it has sold a lot of tickets and is a money-making success.  When a movie sells very few tickets, we say that the movie has bombed.

For something to flatten means to for it to not change, not increase or decrease.  We usually use this to talk about something that has been growing or increasing, but now, that growth or increase has stopped.  This use of “flattened” probably comes from line charts or graphs, showing trends or movement over time.

If something is lucrative, it is likely to make you a lot of money.  We use it to talk about business deals or opportunities: “My brother told me about a lucrative new stock, but I’m too unsure about it to buy it.”

To plummet means to fall or decrease very quickly and very much.  You can use this word literally to mean that someone or something falls very quickly from a high place:  “Jeff dropped the water balloon out of the window, but it plummeted to the ground without hitting me.”  More often, we use “plummet” figuratively to talk about things that decrease quickly:
– “Sales of bananas grown in this area plummeted when people got sick from eating them.”
– “The price of our company’s stocks plummeted with news of the scandal.”

These are all common terms we use, not only to talk about the market for movies, but to talk about business in general (with the exception of “box office,” of course).  You can read the full article here.

Have you seen any Hollywood blockbusters recently you’d recommend? Are you looking forward to any that you’ve heard about?

email
This entry was posted in Business, News and Current Events. Bookmark the permalink.