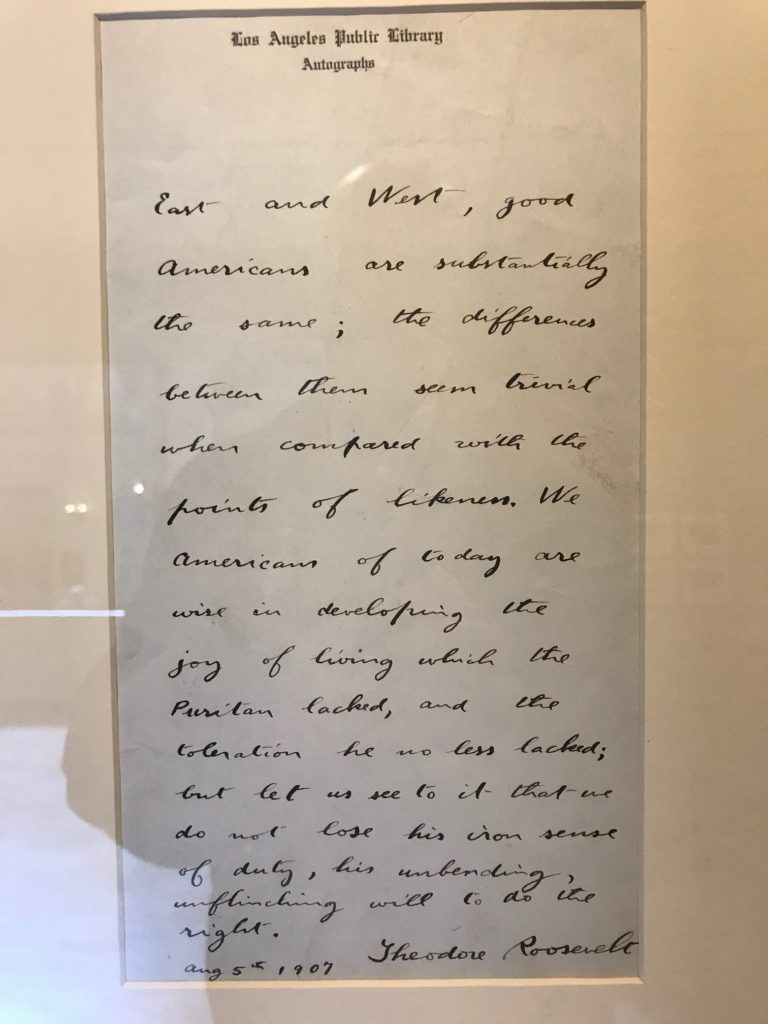 One of our most famous presidents was Theodore or “Teddy” (a short name for Theodore) Roosevelt, who was president of the U.S. between 1901 and 1909.

Roosevelt was first famous for being a leader during the Spanish-American War in 1898, and later for his love of the environment. (Our Cultural English lesson #300 has even more information about him.)

Toward the end of his presidency, Roosevelt wrote a letter to the Los Angeles Public Library. It seems the library was asking different famous people for their autographs (signatures). Roosevelt wrote a short note along with his signature (see photo).

Today you can see that note on a wall in the main public library in L.A.

Roosevelt’s note talks about how Americans, despite their differences, are really the same in the most important ways.

He speaks of the importance of toleration, which is the ability to get along with people (or countries or ideas) different from us, to allow them to live their lives as they wish.

Here’s the text (words) of his short note:

East and West, good Americans are substantially (basically; essentially) the same; the differences between them seem trivial (not important) when compared with the points of likeness (things they have in common or share).

We Americans of today are wise (smart) in developing (growing) the joy of living which the Puritan* lacked (did not have), and the toleration he [the Puritan] no less lacked (also didn’t have); but let us see to it (let’s make sure) that we do not lose his iron sense of duty (the Puritan’s strong believe that you must do what you’re supposed to do, even if it is difficult), his unbending (unchanging), unflinching (strong, without change) will (desire) to do the right (the correct thing).

Is Roosevelt still right about Americans?

The United States has experienced two decades (20 years) or more of often bitter (very harsh or mean) political debates. Today, with social media, people appear to be even more divided on their political views.

Is it still true that Americans believe in toleration, in joy, and in doing one’s duty? I hope it is.

*The Puritans were among the first British settlers to come to America. They are famous for having a very strict lifestyle, which most people see now as boring, restrictive, and not very fun. Learn more about them in our Cultural English lesson #377.

Then you need to try one of our Unlimited English lessons from ESLPod.com!

Used by more than 1.27 million people in 189 countries, our Unlimited English lessons are designed to help you understand English so you can speak it.