The Railroad That Wasn’t 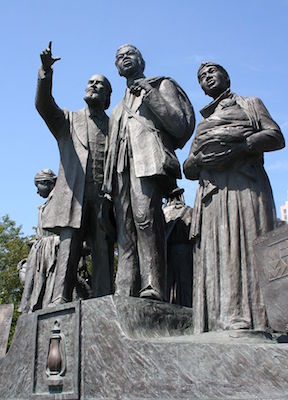 Imagine, if you can, a railroad that had most of the things that railroads have . . .

. . . but no trains and no tracks (the metal strips that trains ride on).

February is Black, or African-American, History Month – when we celebrate important people and events in black history in the U.S. and Canada. One of the fascinating chapters in that history is the story of the railroad that wasn’t – the Underground Railroad.

The Underground Railroad wasn’t a real railroad. And it wasn’t underground (beneath or below the earth). It was a network (system) of people who worked together to help slaves who had escaped from their owners to move from the southern U.S. to the northern states and Canada where they could be free. It was called “underground” because everything they did had to be secret. They used railroad language so that if anyone heard them talking, they wouldn’t know what they were talking about.

The Underground Railroad was made up of meeting places and safe houses – “stations” – that connected different different routes and different parts of each route. Slaves, who were sometimes referred to as “freight,” walked or rode in farm wagons about 10-20 miles (16-32 km) from one station to the next in small groups, usually at night. During the day, they rested in farm buildings, church basements (under the floor), or caves (large holes in the ground).

Conductors – free blacks, people who used to be slaves, and friendly white people – helped lead each group of escaped slaves from station to station along the railroad.

Traveling along the Underground Railroad was dangerous, even after the slaves crossed into the northern states. Bounty hunters, people who tried to find and catch slaves for money, were active, even in the North. If slaves were caught, the laws didn’t protect them very well, and many of those who were caught were taken back to their owners in the South.

Even though it was difficult and dangerous, about 100,000 slaves traveled the Underground Railroad to freedom in the northern U.S. and Canada before the Civil War.

This year the New York Times published an interesting set of articles about the Underground Railroad. The first, “Harriet Tubman’s Path to Freedom,” tells the story of Tubman, the most famous conductor. After she escaped slavery, she made 13 more trips along the railroad to help other slaves make their way to freedom.

The first article includes a map that changes as you read to show the places the article is talking about. At the end of the article you will find links to the other articles. Now that you know a little about the Underground Railroad and some of the words used to talk about it, you will find it easier to understand this important chapter of U.S. history when you read them.

Photo of The Underground Railroad Memorial courtesy of Wikipedia Commons.

9 Responses to The Railroad That Wasn’t