What am I, Chopped Liver? 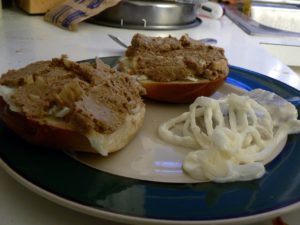 Hello, everybody! Today, I’m going to talk about a phrase you might hear in conversation, one that sounds just a little bit strange.

One of the strangest American expressions is “What am I, chopped liver?” It’s used when someone has said or done something to indicate (show) that they don’t think highly of you (don’t have a good opinion of you) or your skills. The liver is the organ in the body near the stomach that does many things, including removing toxins (poisons) from the body. The liver of many animals, such as cows and chickens, is often prepared as food. Chopped liver is a traditional Jewish dish made by cooking the liver with onions in oil in a hot pan. It’s usually eaten as a spread (soft, thick moist substance) on bread or crackers (small, flat, crisp food often eaten with cheese or other food on top).

Why has chopped liver become associated with being underappreciated (not valued)? Nobody knows for sure, but there are a few possible explanations.

First, chopped liver isn’t a dish that everybody likes, so comparing something to chopped liver is a way of expressing frustration or anger that you’re being ignored (not getting attention) or dismissed (treat as not useful or worthy) as being unimportant, just as chopped liver might be.

Another explanation is that chopped liver is usually served as a side dish (smaller, less important part of a meal) and not the main course (the main part of a meal). So when we compare ourselves or someone else to chopped liver, we’re saying that we (or they) are not important and we are easy to overlook (be ignored; not notice).

So the next time you feel ignored or underappreciated, you can say, “What am I, chopped liver?” It’s a rhetorical question (question asked without expecting or needing an answer), but since it communicates that you’ve been insulted (treated disrespectfully) or your feelings have been hurt (treated unkindly), the person you’re speaking to will probably reassure you (say something so you won’t doubt or fear something anymore) — that is, if they like you.

7 Responses to What am I, Chopped Liver?