Canadians: We’re Coming For You 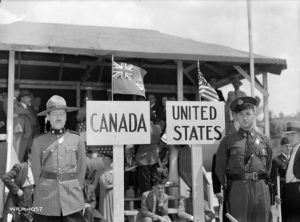 The United States and Canada are usually friendly neighbors. We share the longest demilitarized border (without an army or military protection) in the world, and our citizens can travel back and forth without any special visas. But things haven’t always been peaceful (calm and without fighting) between us. In the middle of the 1800s, some Americans actually attacked Canada. The history behind (the story that explains) this attack is somewhat complicated, but basically it was brought on (came about; was caused by) by two, completely unrelated events.

The first event took place not in America, but in Ireland. From 1845 to 1852, the Irish (the people of Ireland) went through a terrible period called the Great Irish Famine (having very little food). The potato crop (plants grown for food), which was so important to the Irish diet (what people eat), was nearly wiped out (completely destroyed) by disease, leaving many people starving (dying because of not having enough food). At least one million people died.

Due to this famine, about two million people left Ireland, many coming to the United States. (Note: the McQuillans left Ireland just before the famine, in 1840. My father told me that was because we wanted to beat the rush (get somewhere before everyone else does).) Many of the Irish blamed British policies for making the suffering (pain) of the Irish even worse, leading to (causing) the high mortality (number of deaths) of the famine.

Irish immigrants brought their hatred of the British with them to America, leading to the formation (getting together) of groups that wanted to end British control over the country of Ireland. Those who joined these groups were called “Fenians,” a name supposedly taken from the “Fianna,” a group of the king’s guards (protectors) led by the famous Irish leader Finn MacCool.

The second event in our story happened a few years after the Irish famine: the American Civil War between the northern and southern states, fought between 1861 and 1865, that resulted in the deaths of more than 800,000 people. Thousands of these new Irish immigrants had joined the military and fought in the Civil War, and when the war ended, they were mustered out (resigned from the military; officially left the military) of the army.

And this is where these two otherwise separate events come together: (1) a lot of trained former Civil War soldiers with no jobs and nothing better to do with their time, many of whom (2) hated the British due in part to their actions during the previous Irish Famine.

Some of the Fenians came up with a plan to use these Irish American soldiers to help free Ireland from the British. They reasoned (thought) that since Canada was under British rule at this time, if the Fenians could get the British military to start fighting in Canada, it would make it easier for the Fenians in Ireland to take control and declare Ireland a separate, self-governed (ruled by its own people) nation. The British Army, or so the Fenians thought, would be so busy fighting a war thousands of miles away in Canada that they wouldn’t be able to defend Ireland.

The whole thing looked great on paper (seemed like a good plan), but, well, it didn’t exactly go as the Fenians had planned.

The first step in the plan was to start a war in Canada. So over 700 Fenians from Ireland and 800 of these ex-soldiers from the American Civil War decided to meet in northern Maine, a state next to Canada, in northeast corner of the U.S. Their goal was to seize (take control) a small island, Campobello Island, that was part of British Canada. From there, they would be able to expand (make bigger; increase) the war to other parts of Canada, causing the British to send thousands of its troops (soldiers) to stop them.

After fierce (intense) fighting and several deaths on both sides, the Fenians failed. They tried again later that year. They failed again. Finally, a few years later, in 1870, they made another attempt at attacking Canada. That failed, too.

These attacks were not supported by the American government, of course. They only involved former American soldiers who were acting on their own. Still, we can truthfully say that Americans attacked Canada – and the Canadians won.

Even today, in bars and pubs (what the British call “bars”) in Ireland and in the United States, you’ll hear songs about these “brave” Fenian men who took part in (were involved in) these (completely unsuccessful) raids. And who knows? Some of them may have even been my Irish American relatives!

10 Responses to Canadians: We’re Coming For You