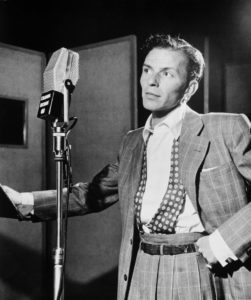 The well-known singer Frank Sinatra had a long and successful career, but things didn’t always go smoothly (not always without problems) for him, according to the National Archives. The 58-year-old singer arrived in Melbourne, Australia on July 9, 1974 to give several concerts: two in Melbourne and three in Sydney.

Sinatra had come out of retirement (start working again after ending his career) to perform these concerts, so reporters were eager (wanting very much) to talk to him. They tried to talk to him when he arrived at the airport, but he refused to give any interviews (have meetings with reporters to answer questions). Without anything to write about, the reporters wrote of his alleged (claimed but not proven) mafia ties (connections with crime organizations) and ran photos of his many female companions with the caption (words under a photo) “Sinatra’s molls.” A gangster is someone working in a criminal organization and a “moll” was a term used for a gangster’s girlfriend.

Sinatra saw the articles and wasn’t happy. Following his opening number (first song in a concert) at the Melbourne concert that evening, Sinatra complained about being chased (run after) all day. He called the press parasites (organisms or living things that feed off of other living things) and said that female reporters who work for the press were hookers (women who sell sex for money).

As you can imagine, the press was not at all happy with Sinatra. The next morning, the Australian Journalists‘ (reporters) Union (organization of workers) demanded an apology (asked forcefully for him to say “sorry”). Sinatra refused (said “no”).

The head (leader) of the Journalists’ Union asked the other unions for help. The theatrical (related to the theater or stage where people perform) unions cancelled Sinatra’s second concert in Melbourne. The Transport Workers Union members refused to refuel (put more gas or fuel into) Sinatra’s private jet (small, fast airplane). Hotel union members would not serve Sinatra or the people with him or handle (move or carry) their luggage.

Sinatra flew on a commercial (not private; owned by a company) airline to Sydney for his other three concerts. When he got there, he found out that the theatrical unions there had canceled his three Sydney concerts. And he was trapped (could not go where he wanted)—he couldn’t fly on his private jet or on a commercial airline: the Transport Workers Union refused to fuel any commercial airplane which might carry Sinatra.

The head of the Australian Journalists’ Union told Sinatra that if he didn’t apologize, Sinatra would have to stay in Australia indefinitely (for an unlimited period of time), because he would not be allowed to leave unless he could walk on water.

Finally, Sinatra’s attorney (lawyer) asked for a meeting. The meeting involved U.S. and Australian government officials and 15 union representatives. The meetings lasted a long time, but finally a compromise (agreement in which neither side gets everything it wants) was reached. Sinatra refused to apologize but agreed to sign a statement that he did not intend to insult the Australian press and regretted any harm that his presence (him being there) had caused.

All sides must have been satisfied because his last Sydney concert was rescheduled (held at a different day or time). He was more reserved (not showing emotions) on stage this time. Sinatra and his entourage (people surrounding or traveling with an important person) did finally fly out of Australia.

This was an experience Sinatra did not easily forget. In a later concert in New York, he told an audience: “A funny (strange) thing happened in Australia. I made a mistake and got off the plane.”