Is That Our Daughter in the Mail? 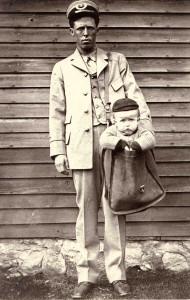 Speak to anyone who has worked for the United States Postal (Mail) Service and they’ll tell you that a lot of strange things have been sent in the mail. Perhaps the strangest were children.

In 1913, the U.S. post office (mail service) announced that it would begin a service called “parcel post” to send items that were too big to fit into an envelope. A “parcel” is a package wrapped in paper or other outer covering ready to be transported or mailed. According to post office policy at the time, the only living things that could be sent were bees and bugs (insects). However, it’s human nature (natural for people) to push the envelope (extend the limits of what is possible or allowed), so people started sending all types of things. In 1914, the first child was sent using parcel post.

This child and all of the others sent during this period were not packed (placed and sealed) in boxes. Instead, most of them had mailing labels (pieces of paper with the address of the person mailing and receiving the item written on it) and stamps sewed (attached using thread) or pinned (attached using a long, thin piece of metal) to the children’s clothing. At that time, the weight limit for mailed packages was 50 pounds (22.7 kilograms), so as long as the children weighed less than that, their parents thought it was worth a try (might be possible).

Why did parents mail their children?

Postage (the amount paid to mail) was much cheaper than buying a train ticket. Some of the mailed children either lived in rural (in the countryside) areas or were sent to relatives (family members) who lived in rural areas. The only people who visited these isolated  (far from other people and cities) places on a daily basis (every day) was the mail carrier (person delivering the mail), so the child could quickly and reliably be “delivered.” In those days, mail carriers were also considered trusted and upstanding (honest and respected) members of the community and could be relied upon to look after (care for) the children being sent. (I’m not maligning (insulting; speak badly of) mail carriers today. It’s just that most people don’t have those same expectation today.)

Many traveled only short distances. The longest trip was taken by a six-year-old girl sent by her mother in Florida to her father’s home in Virginia, about a 800-mile (1290-kilometer) journey (trip). Little Edna was just under 50 pounds and cost 15 cents in postage, about $3.85 in today’s dollars.

Mailing children was not a common practice (didn’t happen a lot), but there were some well-publicized (made so many people knew about it) cases. In 1920, the post office finally officially made it against policy (the rules) to send people in the mail.

What is the strangest thing you’ve ever received or have heard of being sent through the mail?

From Wikipedia, Courtesy of the Smithsonian Institution

11 Responses to Is That Our Daughter in the Mail?