How To Win At Rock-Paper-Scissors 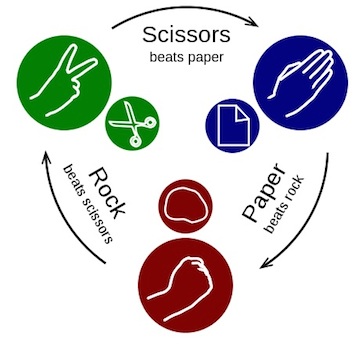 As long as I can remember, children – and others – have played rock-paper-scissors, also called roshambo. Sometimes it’s played as a game, usually between two players. Other times it’s used as a way to choose, for example, who goes first in a game or who pays for lunch.

In rock-paper-scissors, players use their hands to make a gesture (a movement that means something) for rock, paper, or scissors (see the photo or click here for a larger one). You win if your gesture beats (wins over) the gesture of your opponent (the person you are trying to beat).

Here’s how the gestures work:

Here’s how we used to play rock-paper-scissors: To prepare to play, each player puts his/her fist (closed hand) on the palm (inside) of his/her other hand – like putting a cup on a saucer (small round plate). They then raise and lower their fists together (at the same time), hitting their palm each time. The third time, they make the gesture they have chosen – rock, paper, or scissors. The winner is the player whose gesture beats his opponent’s. If the players make the same gesture, they repeat the process until one player wins.

We usually assume (believe without proof or evidence) that people who play games like rock-paper-scissors make random (without a plan or pattern) choices when they choose which gesture to use. Scientists in China recently studied 360 subjects (people tested in a research study) to see if that is true. And they discovered that it’s not.

Here’s what they discovered:

You can use that information to help you win the next time you play rock-paper-scissors. Let me show you how. Imagine that my friend and I are trying to decide who pays for lunch. We’re going to play best of three (one of us must win twice):

I haven’t played rock-paper-scissors for many years, but the next time Jeff and I have lunch together, I think I’ll see if he wants to roshambo to see who pays. I hope he doesn’t read this. I’d like to win!

Have you ever played rock-paper scissors?

5 Responses to How To Win At Rock-Paper-Scissors