Who Are You Calling “Elderly”? 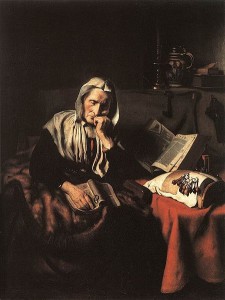 The term “elderly” is used to describe someone who is old, as in “elderly residents (people who live in a place)” or “elderly women.” We also use this term to talk about this segment (part; section) of the population: “the elderly.”

But who defines the age at which one becomes old and should be described as elderly?  This is a sensitive question, because some people say that to call someone elderly is to imply (say indirectly) that someone is weaker, less clear thinking, more forgetful, and generally less able than those who are not elderly. That’s why some people don’t want this term used to describe them.

The word “elderly” actually comes from the noun “elder,” which is simply a person who is older than the others in a particular group, and it doesn’t have a negative connotation (connection; implication). In fact, in some Christian churches and in some Native American tribes (groups; cultures), an elder is a leader who is respected and considered wise (showing a lot of knowledge and good judgement).

A recent National Public Radio story focused on the use of the term “elderly” in news stories, and complaints from the general public when the term is used for people who may be on the cusp (on the border; at the edge of) old age.  Is someone 70 elderly? How about 65 or 60?

In addition to “elderly,” people in the U.S. use the term “senior” or “senior citizen” to describe older people.  Generally, it is used for people who are retired (no longer working due to age).  Traditionally, the retirement age in the U.S. is 65, but these days, with people living longer, some people work into their 70’s or even 80’s.  You’ll see the term “senior” in many places: many restaurants, movie theaters, and stores have senior discounts (lower prices); colleges and community programs have classes targeted to (intended for) seniors; and there are housing developments and communities built to attract seniors.

While the term “senior” references (is related to) retirement, “elderly” does not, which means it is a more imprecise (not accurate) term. That is perhaps why there is more debate (disagreement) about who is considered elderly.

There was a comedian (performer who tells jokes and makes people laugh) named George Carlin who was popular in the 1980’s and 1990’s. One of his funny observations was this: “Have you ever noticed that anybody driving slower than you is an idiot (stupid person), and anyone going faster than you is a maniac (crazy person; person who behaves wildly)?”

I suppose (believe; think) defining “elderly” may work in the same way: it’s always someone older than me.

Are there terms for older people in the languages you know and is there a stigma (negative association) attached to them? At what age do you think someone should be considered or described as being elderly?

20 Responses to Who Are You Calling “Elderly”?