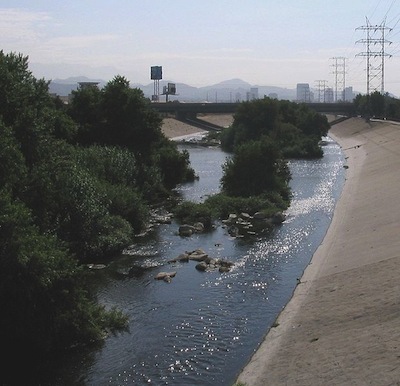 Kayaking?* In Los Angeles? Are you kidding (teasing or joking with) me?

Few people would expect a kayak excursion (short journey organized so that people can visit a place) through Los Angeles on the L. A. River to be one of the hottest tickets (an event so popular that it’s difficult to get tickets for it) in town! But it recently was. Tickets for the excursion sold out in only a few minutes.

If you look at a map of Los Angeles, you’ll see that the L.A. River begins in the mountains north of Los Angeles and flows (moves) through the city. It passes through well-known areas such as Burbank, West Hollywood, and Griffith Park, and finally flows out into the Pacific Ocean in Long Beach.

The L.A. River provided most of Los Angeles’ water until 1913, when the Los Angeles Aqueduct – a man-made river for transporting water – was finished and began to bring water to Los Angeles from the mountains in northern California.

The land on both sides of the river is very low. It’s what we call a flood plain, an area that easily floods (is covered with water) when large amounts of rainwater come down out of the mountains and flows over the banks (sides) of the river. Floods were so unpredictable and so devastating (caused serious damage) that the government lined (covered) the rivers’ bed (bottom) and banks with concrete after a severe (very bad) flood in 1938. Today the river is an important part of the city’s flood control system, but it’s covered with concrete and only a small part of the river enjoys its original bed and banks. Those parts are still beautiful and provide a home for a variety of birds and fish.

Usually the river is off limits to (can’t be used by) recreational users. Some of the water in it comes from storm drains, electric power-generating (producing) plants, and other industrial sources and is polluted. When floods come, the water rises quickly, flows fast, and becomes very dangerous.

The excursion, called Paddle the L.A. River, was the work of an organization named L.A. River Expeditions. It’s a group of concerned citizens and organizations who began working to protect the river in 2008. As a result of their work, the government declared (made an official statement) it to be a “traditional navigable (usable by boats) waterway” in 2010 and gave it the same federal protection as a real river.

In 2011, more organizations joined L.A. River Expeditions and helped create the Paddle the L.A. River boating program and sponsor (organize and support) the first excursion. The number of people and organizations who support the program continues to grow. The program provides recreation (enjoyable activities) and education while helping to clean up the river and change the way people think about it.

Chris Erskine, a Los Angeles Times writer who joined the excursion, writes: “If someone had blind-folded you (covered your eyes) and plopped (dropped) you down here … you might think you’re in Idaho (a state with a lot of beautiful natural areas).”

The Los Angeles River project is a good example of what concerned citizens can do to encourage urban renewal – redeveloping or renovating (repairing, fixing) the bad parts of a city. Perhaps there are similar projects where you live. Urban renewal projects are becoming more and more necessary and common across the U.S. and around the world.

You can see pictures that were taken during the 2012 Paddle the L.A. River excursion on the L.A. River Expeditions web site. Click on the pictures on the side of the home page and use your left/right arrows or mouse to move from picture to picture.

*Kayaks are small, one- or two-person boats originally developed about 4,000 years ago by the native people of Canada, Alaska, Greenland, Iceland, and Russia who lived near the Arctic Circle. They used them to hunt and fish on lakes, rivers, and coastal (where the land meets the ocean) waters of the Northern Pacific and Atlantic Oceans, the Arctic Ocean and the Bering Sea. Today they’re used around the world for recreation.