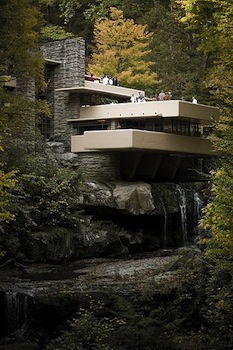 I don’t often surf (move from one site to another) the Internet. But I did recently. And it started at the Smithsonian Magazine web site (highly recommended!) when I saw an article titled “Frank Lloyd Wright’s Most Beautiful Work.” The article begins like this:

“If the skyscraper (very tall building) is America’s most iconic* building, a small personal residence (home) in southwest Pennsylvania (a state near New York) might be its most ingenious (the result of clever thinking and new ideas).” That small residence is called Fallingwater, and it was designed by Frank Lloyd Wright, one of America’s greatest architects (building designer).

Fallingwater was designed and built for Edgar Kaufmann, a wealthy American businessman, in the 1930s. Kaufmann wanted a mountain retreat (a quiet place; vacation home) near the waterfalls of Bear Run, Pennsylvania.

When Wright looked at the site (location) for the house, he told Kaufman, “I want you to live with the waterfall, not just look at it.” In a 1954 interview, Wright said, “There in a beautiful forest was a solid, high rock ledge (narrow surface sticking out from the mountain) rising beside a waterfall and the natural thing seemed to be to [extend] the house from that rock…over the falling water…. He [Kaufmann] loved the site where the house was built and liked to listen to the waterfall. So that was a prime (main) motive (reason) in the design. I think that you can hear the waterfall when you look at the design.”

Many people believe that Fallingwater is the perfect marriage (combination; mixture) of house and site. In the Smithsonian article, Eric Jaffe writes that the sound of the waterfall fills the house but is never too loud. A boulder (large rock) juts (extends) into the living room and becomes part of the fireplace. Windows open outward from the corners of the walls so they don’t hide the view of the mountain and waterfall. Most of the materials – the wood and stone, for example – come from the mountains and forests surrounding (around) the house.

A beautiful animated video by Spanish artist Cristóbal Vila illustrates (shows) what I’ve been writing about. In it, Fallingwater grows out of the ground in the forest surrounding the waterfall and becomes a very natural part of the landscape (an area of land). Be sure you take time to watch it.

If you’d like to learn more about Fallingwater, visit Cristobal’s web site or the Fallingwater web site, where you can find a set of plans (construction drawings) for the house.

*An icon is a person or thing that represents something else and reminds us of it. For example, The Statue of Liberty is an American icon: when people see it, it reminds them of the U.S. The writer is saying that skyscrapers, which were first built in the U.S. in the 1800s, have that same quality. That may be less true today because now there are skyscrapers in many countries.

~ Warren Ediger – creator of Successful English where you’ll find ideas to help you Fine-tune your reading for better English.