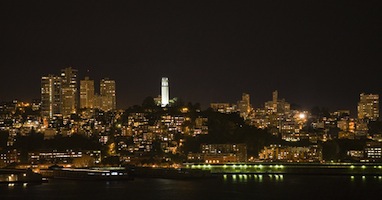 Coit Tower isn’t very tall – only 210 feet (64 m). In fact, it’s short compared to some of the other buildings on the San Francisco skyline (the shape made by hills and buildings against the sky). But it stands on top of Telegraph Hill, so it’s hard to miss (avoid seeing) by day or by night.

Telegraph Hill, which is popular with many tourists, is an important part of San Francisco’s history. It gets its name from a signal (something used to send messages), located at the top of the Hill, that was used to identify ships arriving in San Francisco harbor (place near the city where ships stop). In 1850, the signal alerted (sent a message to) San Franciscans that California had become the 31st state in the U.S.

Coit Tower was built on Telegraph Hill as a gift from wealthy socialite (well-known rich woman) Lillie Hitchcock Coit. She was a little eccentric (unusual, odd) – for example, she loved to chase fires (go where fires are burning) – but she wanted to add “to the beauty of the city which [she] had always loved.” The Tower was designed in the art deco style – with strong, simple shapes and colors – that was popular in the 1920s and 30s. It was dedicated (officially opened) in 1933.

Many people have seen the Tower from the outside; fewer, however, know about the art treasure inside. The interior walls are covered with fresco murals created by 27 different artists and their assistants. Frescos are works of art created by painting directly on the surface of a wall or ceiling, often when the surface is still wet, so that the painting becomes a permanent part of the wall or ceiling. Leonardo Da Vinci’s The Last Supper is one of the most famous examples of fresco.

A mural is any work of art painted on a wall or ceiling, often as a part of the design of the building. According to a recent report, more than 2500 murals were painted in post offices, schools, and other public buildings in the U.S. in the 1920s. The murals in Coit Tower tell a story of life in California in the early part of the 20th century. They include scenes of “the grim (serious) reality (truth) of city life, the pastoral (peaceful) beauty of California’s agriculture (farm life), and the worlds of food and leisure (relaxing activity).” Famous Mexican muralist (someone who paints murals) Diego Rivera influenced many of the artists who painted the Coit murals.

Many of the public murals in the U.S., including those in the Coit Tower, are in danger today. The U.S. Post Office, for example, is down-sizing (becoming smaller) and closing many of their buildings, including some with murals. The Coit murals, however, face a different peril (serous and immediate danger) – the San Francisco fog.

One of the problems with frescos is that anything in the environment that damages the wall or ceiling they’re painted on also damages the paintings. This kind of deterioration (becoming worse) seriously damaged Da Vinci’s Last Supper and required a major effort by art conservators (someone who repairs art) to rescue (save) the painting.

In the Coit Tower, moisture (small amounts of water) from the almost daily San Francisco fog penetrates (goes into) the walls. As it evaporates (dries), it moves through the wall to the painting on the face of the wall and leaves tiny white salt crystals (pieces of salt) that slowly destroy the paintings. This process causes the wall and the paintings that cover it to slowly crumble, or fall apart.

People in San Francisco have begun to raise money to try to preserve (save and protect) the tower.

If you’d like to learn more about the Coit Tower  murals and what’s being done to save them, you can read and listen to this story from the PBS Newshour.

~ Warren Ediger – English tutor and coach and creator of Successful English, where you can find clear explanations and practical suggestion for better English.

17 Responses to Murals in Peril*