A Message from a Silent Lady 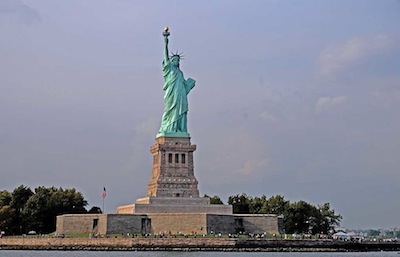 Possibly the oldest lady in the U.S. celebrated her 125th birthday a few days ago. For many years she never said a word, but her message spread throughout (to every part of) the world. When she did speak, her words were written by someone else. This is her story.

From 1836 to 1914, more than 30 million Europeans, including my family, immigrated to the U.S. During the 19th century (1800s) most came from northern Europe; in the early 20th century (1900s) they came mainly from southern and eastern Europe. The peak year (the year of the largest number) was 1907, when more than 1.25 million came from Europe to the U.S. The number could have been even larger: almost 15% of those who began the journey (long trip) died before they arrived.

For many of the immigrants who made that journey, the sighting (first view or look) of the Statue of Liberty announced (told them) that they had arrived safely, that the journey was almost over, and a new life was about to begin.

The Statue of Liberty has not always been the greeter (someone who welcomes) of immigrants and the symbol (something that represents or stands for something else) of hope for those who were looking for work and the freedom to think and worship (practice their religion) the way they wanted. She began life as a gift from a friend. During the American Revolution, France had fought with the U.S., helping it win its freedom from England. About 100 years later, in the late 1800s, France gave the Statue to the U.S. to celebrate both countries’ belief in liberty.

The Statue represents Libertas, the Roman goddess of freedom. She holds a torch (a burning light) in her right hand and a tablet (a flat piece of stone or wood to write on), representing the law, in her left hand. The date of the American Declaration of Independence – July 4, 1776 – is written on the tablet. A broken chain lies on the ground at her feet.

As immigrants passed (went by) the Statue on their way to New York harbor (where ships stop), it began to take on (develop) new meaning. That meaning became permanent as the result of a short poem written in 1883. The U.S. didn’t have enough money to finish the pedestal (base or support) the Statue stands on. Many Americans sent donations (money gifts) – often less than one dollar – to help pay for the pedestal. Many artists, like poet Emma Lazarus, created artworks to help raise money.

Lazarus’ poem, New Colossus, included the now-famous words that gave new meaning to the Statue. Here are some of the most important lines from the poem; I’ve paraphrased (used my words) some of it to make it easier to understand:

Here shall stand a mighty woman, the mother of exiles (people who live away from their native country). The light of her torch shines around the world, and she silently cries, “Give me your tired, your poor, your huddled (to be close together because you’re cold or afraid) masses (large numbers of people) yearning (desiring) to breath free.”

In 1903 Lazarus’ poem became a permanent part of the Statue. It was engraved (cut into a piece of metal) on a plaque (piece of metal with writing on it) and hung inside of it.

Happy birthday, Lady Liberty! May you have many more.

27 Responses to A Message from a Silent Lady