You Vote What You Eat 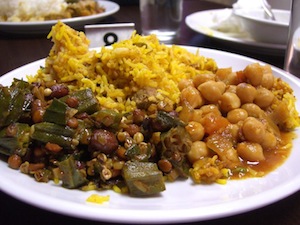 It’s here! The 2012 presidential campaign has begun. The big battle is shaping up (developing) – Democrats versus (against) Republicans, liberals* versus conservatives*, President Obama versus … who knows?

For the next 14 months – from now until November 2012 – we’re going to be flooded with (receive a lot) more political advertisements, political speeches, political debates, and political news stories than you can imagine! And dinner or coffee with friends will usually be served with (include) talk about politics.

To be honest (tell the truth), I get tired of all the political noise – the advertisements, the speeches, the debates, the news stories, and endless conversations. But what can I do about it?

I found an answer to my question at hunch.com. According to Hunch, liberals and conservatives eat differently. Or, as they put (wrote; said) it: “You vote what you eat.” If that’s true, we don’t need to discuss politics. We can find out what we want to know about someone’s political beliefs by checking out (looking at) what they eat!

The people at Hunch asked about 2,000 readers how they described themselves politically – whether they were liberal or conservative or somewhere in the middle. And then they asked them about their food preferences (what kind of food they would choose) and attitudes toward different foods.

Here are a few things you’ll learn about liberal and conservative eating habits (something you do regularly) and attitudes if you look at the Hunch study:

There you have it (there it is): if you know someone’s food preferences and attitudes, you can tell a lot about their political beliefs. You don’t even have to ask, if you don’t want to. Just watch them eat. That has to (must) be better than all that political noise!

I hope you realize that much of this has been tongue-in-cheek (meant to be humorous; not serious). Responsible citizens – including me – will listen and think about and discuss politics, even if it seems noisy at times (occasionally).

*Note: it’s difficult to explain the differences between liberals and conservatives in a few words. Here are two very simple descriptions from what Wikipedia says about them:

A study done last month reveals (shows) that 41% of Americans call themselves conservative, 36% moderate (in the middle), and 21% liberal. For more on political parties in the U.S., listen to English Cafe 26.

16 Responses to You Vote What You Eat