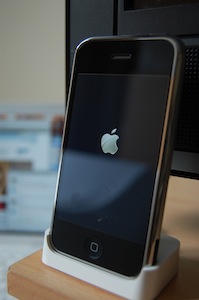 We’ve just returned from a fun weekend with family and friends near Santa Cruz, California. The occasion (event) was our oldest daughter’s wedding in a beautiful setting (location) at a vineyard (where grapes are grown for wine) atop (on top of) a mountain overlooking Santa Cruz and the Pacific Ocean. Our younger daughter said the house at the vineyard reminded her of the house in The Great Gatsby, a well-known book written by F. Scott Fitzgerald in 1925 about the people who lived on Long Island’s North Shore and in New York City. (Long Island is an island that includes parts of New York City.)

One of the things that amused (made me smile) me during the weekend was that electronic gadgets (small, useful machines or tools) popped up (appeared) everywhere! Everywhere I looked I saw iPhones, Blackberries, Androids, iPads, and laptops – not all at the wedding, but in the days before and after. I used my iPhone for my notes when I toasted the bride and groom at the dinner after the wedding. A toast is a call to a group of people – “I’d like to propose (suggest) a toast to the bride and groom” – to raise their glasses and drink together in honor of someone, usually on a special occasion. I wouldn’t be surprised to discover that someone had posted pictures of the bride and groom on Facebook before they exited (left) the area where the wedding was performed!

Stephen Abram recently wrote about a Pew Research report that found (discovered) that 90% of Americans own at least one computerized gadget. I know that my wife and I had seven gadgets in our car as we traveled – two laptops (MacBooks, of course!), three iPods, a Blackberry, and an iPhone!

The Pew study reveals (shows) that electronic gadgets have become popular across all generations (groups of people who are the same age). It also found that:

It was a memorable (worth remembering) weekend! And it was fascinating to watch people of all ages using their gadgets to keep up with (to write, etc., regularly so you don’t forget someone) friends, stay in touch with (to talk or write to) family, and share the excitement of the weekend with people around the world!

Photo courtesy of the Wikipedia Commons.