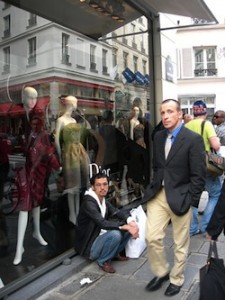 I want to warn you that much of this post is tongue-in-cheek, or ironic – some words are used in an opposite way to create humor. I think I learned this from Jeff. On to my story…

If we can believe the people from Lee, there’s an epidemic among men and many men don’t even know they have the disease. Lee is a well-known American company that’s been making jeans (informal pants made of denim, or cotton, often called blue jeans) since 1889.

Let me pause (stop briefly) for a moment to tell you about the –demic words – there are three of them. An epidemic is a disease that quickly affects a large number of people and then goes away. During the Middle Ages – from about 500-1500 – there were many epidemics in Europe. A pandemic is an epidemic that affects entire continents or even the whole world. The Black Death in Europe from 1348-1350 was a pandemic; it killed more than 30% of the people in Europe. Endemic, an adjective, describes a condition or disease that is found in a certain area or among a certain group of people. Malaria (a disease carried by mosquitos) is endemic in many areas with hot, wet climates (weather conditions).

According to Lee, growing numbers of men suffer from shop phobia. As you may know, a phobia is a strong irrational (not based on thought or reason) fear of something, like spiders or tall buildings. What they are saying is that many of us men are scared to death (extremely frightened) of shopping. Apparently (it seems that) there’s something about shopping that turns our legs to jelly (makes them shake because we’re frightened).

I discovered this recently when I stumbled onto (found by accident) a special web site created by the people at Lee. I was greeted by (welcomed or met by) the headline “Make no mistake, shop phobia is an epidemic.” And then I found a video in which Mike confesses (to say that one has done something wrong or that something exists that one is ashamed of) that he is shop phobic and has been all his life.

The truth is, I’ve been shop phobic all my life and didn’t know it until I came here and took this test. And now I feel fantastic. I still remember, to this day, when it started for me. It was Black Friday, the day after Thanksgiving, twenty-five years ago (Black Friday is the busiest shopping day in the year, a good day to stay home).

Mike seems to feel better now that he has discovered the truth that he is shop phobic. And confessing it seemed to make him feel even better.

What about you? Are you shop phobic? If you’re not sure, you can take the test Mike talks about. If you’re brave (not afraid), you can have your wife or girl friend take it for you! Click on the “Get Tested” button if you’re taking the test yourself. If your girlfriend or wife is taking it for you, have her click on the “Find Out How Bad He’s Got It” button.

From what I see on the Internet, it’s possible that this epidemic – shop phobia – has been around (existed) for some time (a long time). In fact, I wonder if it might actually be a pandemic rather than an epidemic: I found articles about it from several different countries.

The thing that bothered me the most in what I found on the Internet was that many writers think this problem is endemic among men – that all men have it. But then I noticed something else – all the writers were women. I thought that explained it until I asked my wife, and she agreed with them! Now I’m not so sure because she’s always right.

What do you think?

~ Warren Ediger – ESL and TOEFL tutor/coach; creator of Successful English where you can find clear explanations and practical suggestions for improving your English.

Photo by Ilovesorbet used by under Creative Commons license.