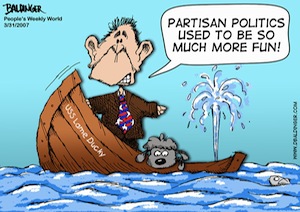 Maybe you haven’t noticed, but Americans are often very idealistic. What I mean is this: many Americans, maybe most Americans, believe that you should try to live according to high principles (beliefs about what is right and wrong) even if it’s not always possible or practical (realistic).

If you are familiar with American history, this shouldn’t be a surprise. The first official document, The Declaration of Independence, is very idealistic. Before the writers of the Declaration listed their grievances (complaints) against the king of England, they made these idealistic statements:

If you listened to the first speech Barak Obama gave after he became president, you might remember that he was very idealistic. He called for an end to the politics of “petty grievances” and “worn-out dogmas.” A petty grievance is something small and unimportant that upsets you and a worn-out dogma is a strong belief that is too old to be used any more. Clearly, he hoped that the Republicans and Democrats would stop quarreling (arguing) and begin to work together.

It didn’t take long for the idealism to disappear! For example, the new health care law was passed only after a lot of disagreement and argument. There was very little real discussion and cooperation. The law passed because the Democrats, President Obama’s party, had enough votes to win without help from the Republicans. It was a partisan decision (supported by only one political party), not bi-partisan (supported by both parties).

Many Americans were upset and disappointed because the two parties weren’t able to work together. In some countries, this would be politics as usual (the way politics is always done).

Should Americans have been surprised? What does history tell us? I found two interesting articles, one from a web site called History Now and the other from the Richmond (Virginia) Times-Dispatch (newspaper) web site. After reading the two articles, I don’t think Americans should have been surprised, even if they were disappointed. Partisan politics may be bad now, but it’s not new, and in the past it might have even been worse.

In the history of the U.S., there are many examples of partisan politics. In the early years, the 1800s for example, there was even occasional physical violence (fighting and hurting each other’s body) among the politicians. According to the Times-Dispatch article, the only time we have enjoyed bi-partisan politics was during World War II and the Cold War (between the Soviet Union and western countries, especially the United States).

Like President Obama, George Washington, our first president, called for the political parties to work together. He warned that there would be extremely negative results if they didn’t. The American political system may not be as ideal as Presidents Washington and Obama and many Americans would like it to be. Partisan politics may be politics as usual, even in the U.S.

~ Warren Ediger – ESL tutor/English language coach and creator of successfulenglish.com, where you can learn more about how to improve your English.

Cartoon by dbaldinger used with permission.

8 Responses to Politics as Usual?