Will Obama’s Healthcare Plan Make Us a Nation of Girlie Men? Part 1

Our governor here in California, Arnold Schwarzenegger, once famously used the phrase, “Don’t be girlie men!”  This phrase actually comes from a comedy show called Saturday Night Live, on which two actors played bodybuilders (people who try to make their muscles as large as possible) with strong Austrian accents, an obvious reference to former bodybuilder Schwarzenegger himself.  A “girlie man” would be a man who acted more like a woman, and it is meant as an insult in the sense that girlie men are not strong and courageous.  But does being a girlie man actually make a man more attractive to women?  New research seems to suggest that might be true, depending on where you live.  And yes, there is a connection here to healthcare (being healthy, getting medical care).  I’ll get to that in a moment.

The research, which was recently reported in the Wall Street Journal, comes from an experiment at Faceresearch.org, an online project of the University of Aberdeen in Scotland.  In the experiment, nearly 5,000 women in their early to mid-20s (20 to 26, approximately) from all over the world were shown 20 pairs of men’s faces.  For each pair (each two), the women selected the picture of the man they found most attractive.  But the pairs did not show two different men but rather the same man’s face that was digitally altered (changed using computer software) to look either very masculine (manly, like a man) or more feminine (womanly, like a woman).  A more masculine face had slightly thinner (skinnier) lips, eyes that were farther apart, and/or thicker (heavier, with more hair) eyebrows (the line of hair on your face above your eyes).  The more feminine faces had slightly rounder eyes and a narrower jaw (the V-shaped, bottom part of your face that controls the lower part of your mouth).  In addition to recording the women’s preferences, the experiment also determined where the women were from by using their Internet IP address.  Your IP address is sort of your specific address on the Internet and can be used to identify your location.  The women were then grouped together by country and the “National Health Index” from the World Health Organization was calculated for each country.  The National Health Index is an indication of how healthy on average people are in different countries throughout the world.  (The “on average” part is especially important, as we’ll see in Part 2 of this post.)

After crunching the data (doing the statistical, numerical calculations), the researchers found that women from healthier countries tended to prefer the more feminine-looking men, while those from the least healthy countries preferred men who looked more masculine.

In order to control for (to eliminate the effects of, the possible bias due to) skin color and racial preferences, only white women were used in this experiment, looking at pictures of white men.  It is not clear what the results would be if they had included men and women of different races and skin colors.  However, the results are still very interesting and lead us to ask the question: Why would women from healthier countries prefer, well, girlie-looking men?  The researchers presented some possible theories, along with additional information about how a woman chooses the man she wants to have a romantic relationship with.

In Part 2 of this post, I’ll tell you what the researchers’ theories were and how all of this relates to President Obama’s health care plan which was approved recently here in the United States.  But I’ll first let some of you give your theories, and it would be good to hear from both men and women!  I’ve also put a sample pair of men’s faces below so you can see what the women were looking at; the photo on the left side of the screen is the more masculine one. 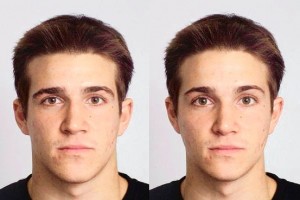 19 Responses to Will Obama’s Healthcare Plan Make Us a Nation of Girlie Men? Part 1