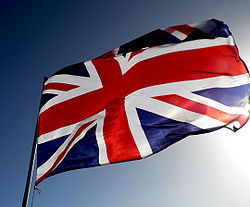 We often get emails from listeners asking us to talk about British English or to tell them the British English equivalent (the same thing in another language/dialect) in our podcasts. We would like to be able to do this, but there’s one major problem: We don’t speak British English!

It’s true that many Americans know some basic differences between these two dialects (forms of a language), but we are just as likely to use British English wrong as we are to use it correctly since we are not native speakers of it. It doesn’t make sense for us to try to teach you British English when we aren’t sure of it ourselves. It would be truly a case of the blind leading the blind (someone who doesn’t know what he/she is doing trying to lead others to do the same thing).

Most of what is available shows spelling or vocabulary differences, though British and American English differ in many, many other ways. Rather than to memorize a list of words or spellings, however, we urge (encourage) those who want to learn British English to listen to it, as they do to ESL Podcast to learn American English. The BBC, British Broadcasting Corporation, for example, has an entire website devoted to teaching British English.